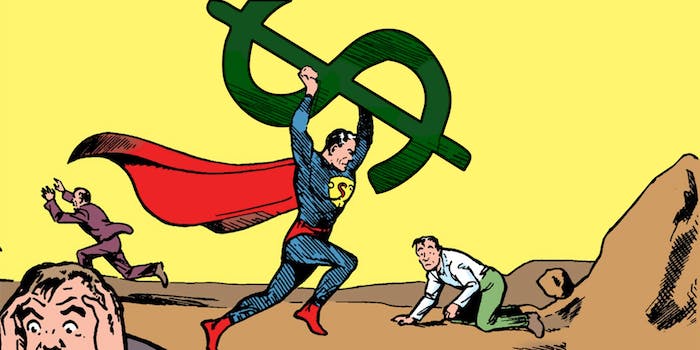 ‘Perfect’ copy of first Superman comic for sale on eBay

The holiest of comic book grails has just hit eBay, and it may be a bit out of your price range.

The holiest of comic book grails has just hit eBay, and it may be a bit out of your price range.

Yes, Action Comics No. 1, the first appearance of Superman, is on sale on the worlds largest auction site. As of now the bid sits at $1,600,100 dollars. That’s a lot of money for a piece of pop-culture Americana that originally sold for 10 cents.

There are about 100 Action Comics No.1’s still in existence. So what makes this one so special? It’s the grading given by the Comics Guaranty Company, a third-party comics grading service. This particular book sits with a 9.0 out of 10 rating. There is only one other 9.0 rated Action Comics No. 1 out there in the wild. But according to the eBay page, at least, this one’s the best.

The comic has “perfect white pages”—hard to fathom considering it was published in 1938. During World War II, the US government had paper drives for the war effort, many parents threw away their kids’ comic books to help the cause. Not only that, comics were mainly for kids, so those kids would throw their copies around and lend them to friends. Over time, the pages naturally wore out.

This particular comic avoided that fate because its owner kept in a cedar box, away from the dilapidating power of sunlight and fresh air.

Some of the proceeds of the sale will go towards the Christopher and Dana Reeve Foundation to help those with paralysis. Here’s hoping a museum picks it up so that the rest of the world may bask in its glory.