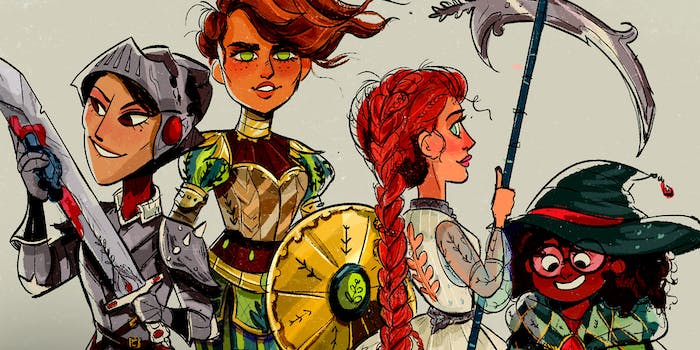 The gorgeous three-volume anthology has already inspired Kickstarter backers to the tune of over $100,000.

The artistic Kickstarter community has rallied hard around a new “people-positive” anthology of fantasy art that boasts contributions from over 250 professionals, including Ryan North and a host of animation, game, and comics artists.

The 1001 Knights Anthology smashed its Kickstarter goal, garnering more than $100,000 just a week into the campaign—and we have exclusive art from a few of the many artists involved that illustrates beautifully why fans have rallied around it. The idea behind the anthology is to create “people-positive characters with feminist overtones.” 1001 Knights focuses on the theme of knights and heroes and comes in three clothbound, gilded-edge hardcover volumes which are divided thematically into “Wisdom,” “Fellowship,” and “Courage.”

The Kickstarter campaign is offering a boxed set of all three volumes of the book to subscribers—currently the only way to guarantee a set of all three. Additionally, the slipcover case and blue-bound editions shown above are only available to Kickstarter backers. An “early bird” reward level quickly filled up, but more levels offering all three books remain, as well as a “retailers” level for booksellers.

The anthology’s creators, Kevin Jay Stanton and Annie Stoll, have been working on lining up the artists for the project for over a year. In an email, they told the Daily Dot they had been inspired by a popular piece of Tumblr fanart.”We’d really started talking after we saw an animation by Olivia Huynh called “Awake” where Sleeping Beauty becomes a knight and crushes the spindle,” Stanton said, adding that they were “both super amped up by it.”

“Fast forward almost two years later, and 1001 Knights is our tribute to the strength of all kinds of characters!”

Almost 1,300 people have contributed to the Kickstarter, pushing it well past its goal with $117,000 funded so far. “It’s been amazing to see people support something that we feel so strongly about,” Stanton said.

One of the campaign’s goals is to allow the many artists involved in the project to sell an artists-only edition of the anthology in their own online shops and website after the Kickstarter. If you miss out on the Kickstarter, you may eventually be able to buy the individual books from the artists directly after the project. In the meantime there are also digital versions available for fans who don’t have the money or space to buy the physical editions.

Here’s a look at a few of the fantasy knights who’ll be gracing the pages of the anthology: As you can see, the anthology has attracted a wide range of artists with varying styles and approaches to the general theme of knighthood. Stoll told the Daily Dot she hopes the diversity will be a source of inspiration.

“I hope that everyone who reads the book finds inspiration and also enjoys finding new artists to follow and support! It was really important to Kevin and I that we embrace these people-positive ideals and in return it has created this fantastic/inspiring and super creative community of artists and readers.”

“I’m absolutely blown away and so very grateful for all the support to the project and our 250+ artists have received,” Stoll told the Daily Dot. “It means the world that so many people are rallying behind this anthology that started out as a small idea and has now grown into something much larger.”