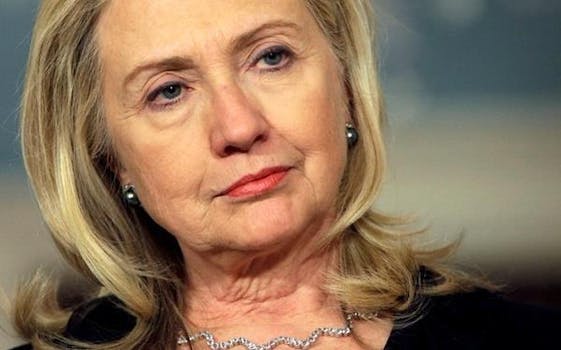 Hillary Clinton’s response to a fashion question takes over Facebook

A quote from an interview with Hillary Clinton has been shared by thousands of Facebook users, although it's been taken a bit out of context.

Thousands of Facebook users are sharing a photo of Secretary of State Hillary Clinton, wearing a stern expression. It’s coupled with this exchange she had with a reporter:

Interviewer: Okay. Which designers do you prefer?

Hillary Clinton: What designers of clothes?

Hillary Clinton: Would you ever ask a man that question?

More than 40,000 people have clicked “like” on the photo within the first 15 hours after it was uploaded by the group UniteWomen.org. And while Clinton did indeed say those words, it’s a little out of context, as is often the case with Facebook shares.

First, that photo doesn’t match up with the above conversation. It was taken Dec 15, 2011, about two weeks after her exchange with the fashion-minded reporter. And how do we know she didn’t similarly scowl a fortnight before?

Because UniteWomen.org cut some context from that conversation. It happened in a lighthearted panel in front of students in Kyrgyzstan. From the official transcript of that panel:

MODERATOR 1: People* always touch some personality of Hillary Clinton. We have some – not just silly questions, but (inaudible) —

That moderator then asked about Chelsea Clinton and Hilary’s personal feelings on Kyrgyzstan before the fashion question.

MODERATOR 1: Okay. Which designers do you prefer?

SECRETARY CLINTON: What designers of clothes?

SECRETARY CLINTON: Would you ever ask a man that question? (Laughter.) (Applause.)

“Of all the questions the interviewer could have asked,” wrote Lana Shirey. “what a missed opportunity to ask something great!!!”

“The Secretary of State of the United States of America, and the stupid reporter can’t think of anything more important to ask than about designer clothes!” exclaimed Suzanne Ray.