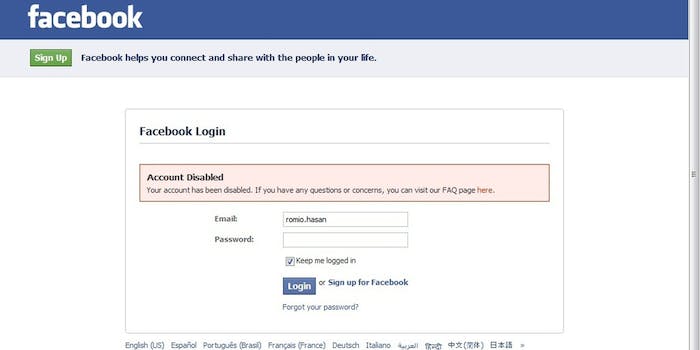 Facebook's crackdown on pseudonyms and false usernames continues with a prompt asking, "Is this your friend's real name?"

Facebook wants to know who your friends are… and who they are not.

In what is described as a “small test,” the social media site is interrupting certain users’ experiences with a prompt. The pop-up message, which cannot be closed, features a person from the user’s friends list whose name is suspected as false.

“Please help us understand how people are using Facebook. Your response is anonymous and won’t affect your friend’s account. Is this your friend’s real name?” the prompt asks. Possible answers are “Yes,” “No,” “I don’t know,” and “I don’t want to answer.”

An image of the prompt was posted to Twitter on Sep. 12 by user @chapeaudefee, along with the question “Are you going to be the snitch?”

“@chapeaudefee I have a few people with silly pseudonyms, but anyone who -needs- to know who they are -does-.” Mark Penrice replied.

“Facebook will soon be designated an official branch of homeland security. I don’t Facebook or twitter and use a browser tracking blocking add on but I’m sure the land of the free and the home of the brave still has plenty of information on me,” user Left Turn commented on an article describing the prompt on Talking Points Memo.

The site’s terms of service require users to display their legal names, and prohibit creating accounts for others or under false names. Earlier this year, Facebook cracked down on fake usernames, effectively destroying social interaction among members of the pseudonym-heavy cosplay community.