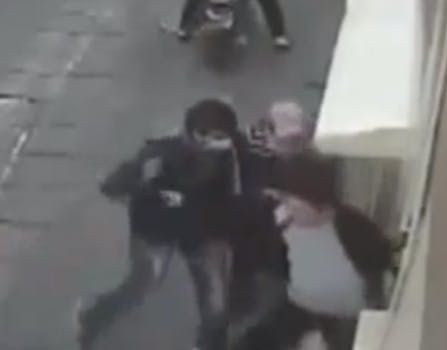 The two were arrested in December after police a video on YouTube that showed them attacking a man in a Tehran street with a machete.

Two men were publicly hanged Monday morning after an Iranian court in Terhan found YouTube footage that implicated the two in the armed assault of another innocent Iranian man.

According to a report released in The New York Times, Alireza Mafiha and Mohammad Ali Sorouri, 23 and 20, respectively, were put to death at 6:30am local time in front of a crowd of 300 people. The two were officially convicted of being “mohareb,” or “waging war against God,” a broad Iranian charge that basically covers everything from anti-state organizing to violent assaults on Iranians.

In actuality, the two were arrested in December after police a video on YouTube that showed them attacking a man in a Tehran street with a machete. In the clip, which is still widely available online, Mafiha, Ali Sorouri, and two other accomplices can be seen riding up to the man on motorcycles, assaulting him for his jacket and goods, then threatening him with the knife.

The two accomplices were both sentenced to 10 years in jail and 74 lashings, as well as a forced five-year exile as soon as they’re freed from prison.

Speaking from the courtroom before the hanging, Iranian judiciary head Ayotollah Sadegh Larijani made it clear that Mafiha and Ali Sorouri both deserved to die despite the fact that the man they’d attacked is still alive and relatively unharmed. (Authorities believe the two only got away with a bag and the equivalent of $20.)

“We need to act assertively and increase the costs for those committing street crimes,” Larijani provided.