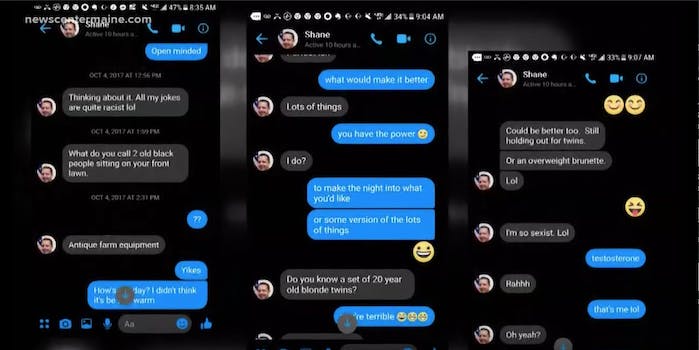 The mayor of Lewiston, Maine resigned after an alleged former girlfriend leaked text exchanges revealing racist and sexist messages that she said came from him.

Republican Shane Bouchard, who was elected in December 2017, stepped down effective Friday morning. The announcement came in the wake of messages revealed by Heather Everly Berube, who says she had an affair with Bouchard.

“All my jokes are quite racist lol,” he apparently said in one exchange in October 2017.

“What do you call 2 old black people sitting on your front lawn,” a follow-up message said. “Antique farm equipment,” was the punchline.

From the exchange, it appears that Berube tried to change the conversation, but eventually lead to Bouchard commenting on a woman’s weight, and then said, “I’m so sexist. Lol.”

He also apparently asked her about “a set of 20 year old blonde twins” to make his night better.

Berube reportedly leaked more than 150 messages between her and Bouchard on Wednesday.

According to reports, she was a volunteer with Ben Chin, Bouchard’s opponent in the 2017 mayoral race. She said she shared some of Chin’s internal documents with Bouchard during the campaign.

Chin faced backlash for stating, in internal communication with his team, that he had encountered racists while campaigning; the comments were regarded as “divisive and insulting” by some. The Sun Journal reports Chin lost that election in part due to the leaked emails, echoing the 2016 presidential election.

Bouchard, who is also reportedly being investigated by the Lewiston police and Maine Attorney General’s office for unspecified “alleged criminal activity” made a dramatic announcement about his departure Friday.

Bouchard said, “I made many mistakes in the past. I’ve also in the past been a victim of some very damaging rumors. My first concern as mayor is and always has been what is best for the city of Lewiston and her people.”

According to NEWS CENTER Maine, Bouchard had less than a year left in his term and will be replaced by Kristen Cloutier, who was previously the city council president.