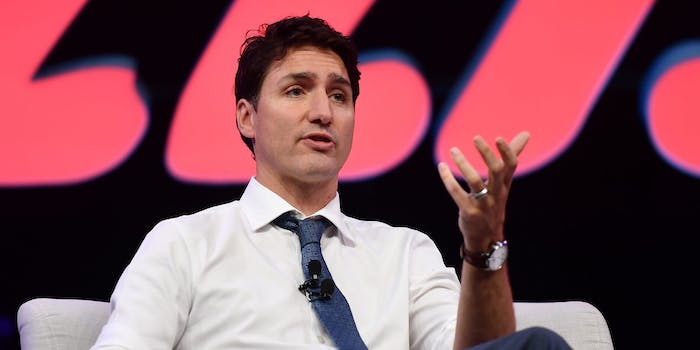 'I shouldn't have done that. I should have known better, but I didn't, and I'm really sorry'

Canadian Prime Minister Justin Trudeau apologized on Wednesday for wearing brownface in the past, hours before a third instance was uncovered by a Canadian news outlet.

On Wednesday, Time magazine obtained a photo of Trudeau wearing brownface makeup at a party in 2001. The picture was taken at an “Arabian Nights” themed party, according to the news outlet, and shows the Canadian prime minister wearing a turban, robes, and makeup on his face and hands.

It was published in the 2001 yearbook of West Point Grey Acadamy, where Trudeau was a teacher at the time.

“I shouldn’t have done that. I should have known better, but I didn’t, and I’m really sorry,” he said, adding: “It was something that I didn’t think was racist at the time, but now I recognize it was something racist to do and I’m deeply sorry.”

During his apology, Trudeau said that he also wore blackface makeup in high school during a talent show while singing “Day-O” a Jamaican folk song.

Justin Trudeau apologises for 'brownface' photo: 'It was racist' pic.twitter.com/X2JW4uu5jF

On Thursday morning, Global News, a Canadian news outlet, published a video that showed Trudeau in what appears to be blackface, wearing ripped jeans and a white t-shirt.

#BREAKING: A video — obtained exclusively by Global News — shows a third instance of Justin Trudeau in what appears to be racist makeup.#cdnpoli #elxn43 https://t.co/1WNWm9QPat

A source confirmed to Global News that it was Trudeau in the video.

Trudeau is running for re-election in October.