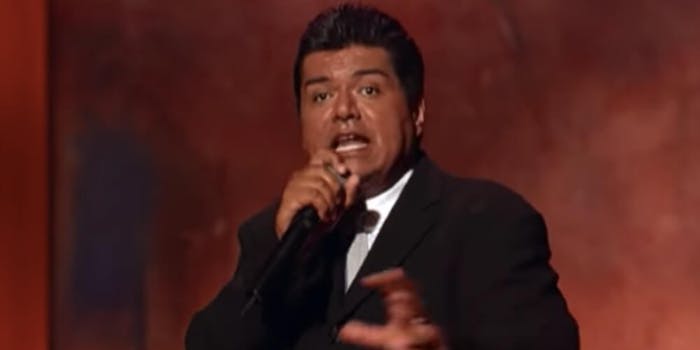 Are conservatives being snowflakes?

Conservative Twitter users were upset on Sunday night after comedian George Lopez made a joke about a reported $80 million bounty put out on President Donald Trump.

The Trump administration killed top Iranian general Qassem Soleimani last week. At his funeral, the eulogist allegedly said that Iranian citizens–about 80 million people–could each put in a dollar in order to offer the multi-million dollar reward.

This statement has not yet been proved true, but Chicano Worldstar posted about the bounty on Instagram with the caption, “What are your thoughts?”

Lopez was quick to share his. He quipped, “We’ll do it for half.”

Right-wing Twitter users were angry about the joke, saying Lopez was calling for Trump’s “assassination.”

“If any ordinary citizen said they would assassinate the President for money, the Secret Service would be at their door,” Conservative activist @alx wrote.

George Lopez is a typical Hollywooder.
He says he wants to assassinate the president of the USA but he'd never have the guts to say the same about the leader of a US enemy.
He knows exactly who he's supposed to hate, and does so.
Gutlessly, mindlessly pc.

Meanwhile, other Twitter users brought up that it’s not that different from Ted Nugent‘s comment that Barack Obama should “suck on my machine gun.”

They also say this comment isn’t that far off from comments the president himself has made.

MAGAts frequently excuse trump, who is NOT a comedian, for saying the most outrageous things by saying "oh, he was just joking."

Also MAGAts: Livid because George Lopez, an ACTUAL comedian, told an actual joke about doing the $80M hit job for half.

people are flipping over this George Lopez shit like Ted Nugent didn't said this.

where was the outrage then? pic.twitter.com/XO7Cu0MPOb

George Lopez was clearly making a joke, but republicans don’t bat an eye when they do it themselves smh pic.twitter.com/hulCKI4ozZ

Trump fans want George Lopez locked up for his comment but they didn’t want Trump locked up after he sexually assaulted those women? pic.twitter.com/Cgh5Vhrd3w

Some people weren’t in the mood for jokes.

“I don’t really have time to give a f*ck about what George Lopez said on Instagram,” Twitter user @siano4progress wrote. “I’m more concerned that the president is threatening to bomb a country and attempt to wipe out their culture.”

I don't really have time to give a fuck about what George Lopez said on Instagram. I'm more concerned that the president is threatening to bomb a country and attempt to wipe out their culture.

Your guy is about to start a war. He's on twitter threatening to commit war crimes. The iraqi parliament voted to expel US troops. Every major city in the US is on high alert.

But sure, let's discuss George Lopez joking abt Mexicans doing a job for half price.

The Trump administration killed Soleimani in an airstrike in Baghdad and justified the killing by saying that he was plotting attacks on U.S. diplomats, which has since been questioned by several U.S. officials.

The administration said that Iran could potentially seek revenge for Soleimani’s killing within the next “few weeks,” which prompted Trump to tweet that the U.S. would respond with possibly “disproportionate” force. He also said attacking cultural sites was an option, which is a war crime.