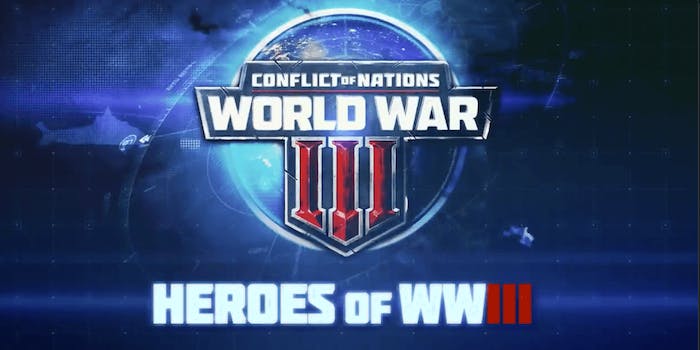 The game's developer said the ad gives users 'the ability to confront their fears.'

A World War III-themed video game is receiving backlash online after one of its advertisements used current tensions between the U.S. and Iran for promotion.

An ad for the strategy war game, titled “Conflict of Nations: World War Three,” published on Twitter on Friday, not long after top Iranian general Qassem Soleimani was killed by a U.S. airstrike.

“Iran starting World War 3? Simulate any #WWIII scenario you can think of in Conflict of Nations right now!” the tweet from @CoNWW3 said.

Iran starting World War 3? Simulate any #WWIII scenario you can think of in Conflict of Nations right now!

As first reported by the Daily Mail, the ad led to a backlash from Twitter users who argued that the game’s attempts to cash in on concerns over a military conflict were in poor taste.

“What in the absolute hell is WRONG WITH YOU,” Twitter user @LeighDMaxwell said.

What in the absolute hell is WRONG WITH YOU

I hope you're aware of how badly this is in poor taste.

Others went as far as to report the ad in an attempt to have it removed.

“I’ve reported this ad as inappropriate… I invite others to do the same,” user @RGerstmeyer wrote.

I've reported this ad as inappropriate…I invite others to do the same.

War is not a game. Ad reported.

This ad is beyond disgusting

As with any issue, some chose to defend the game and its marketing practices, including one user who accused other Twitter users of being “a bunch of snowflakes.”

The game’s developer, Dorado Games, later defended the ad in a statement to Business Insider.

The company said it’s “understandable to see negative feedback due to the fear we all have about World War 3.” But Dorado Games also argued it was providing a service by giving users “the ability to confront their fears and cope with them while playing with and against other players from all around the world.”

Since the assassination of Soleimani, the Trump administration has warned Congress that it expects retaliatory action from Iran “within weeks.”