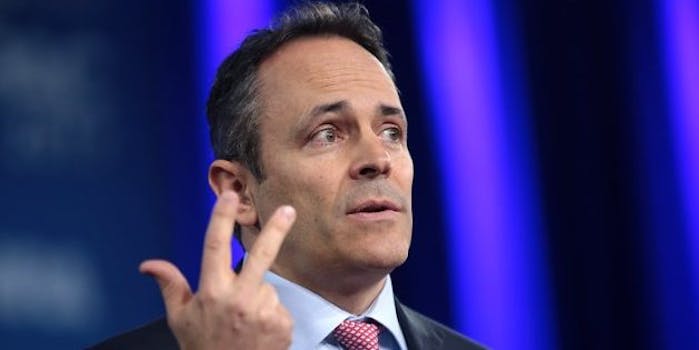 Kentucky governor on pardoning child rapist: ‘Which one?’

Former Governor Matt Bevin (R.-Ky.) has been heavily criticized for pardoning hundreds of people on his way out of office, including a man convicted last year of repeatedly sexually assaulting a nine-year-old. Now he’s defending it by saying the attacks never happened.

The Courier Journal reports that in an interview, radio host Terry Meiners asked Bevin how he could stomach pardoning a child rapist. Bevin responded, “Which one?”

When Meiners clarified that he was referring to convicted pedophile Micah Schoettle, Bevin essentially accused the victim of lying about the assaults. He said the little girl’s sister, who was allegedly present, denied that the attacks took place.

Then he added that the rape couldn’t have occurred because the child’s hymen was “intact.”

“This is perhaps more specific than people would want, but trust me. If you have been repeatedly sexually violated as a small child by an adult, there are going to be repercussions of that physically and medically,” said Bevin, who is not a doctor.

“There was zero evidence,” added the former governor, who is also not a lawyer and reportedly did not contact police, prosecutors, or victims about Schoettle’s clemency.

“Rape is not proved by hymen penetration,” Dr. Nichols said. “Rape is proved by phallic penetration … where the vaginal lips meet the outer surface of the vagina.”

Dr. Nichols added that he’s fortunate to have never had “to report to that asshole.”

Rob Sanders, who prosecuted the case and has called for an investigation into Bevin’s more than 400 lame-duck pardons, which included some relatives of his supporters, told the Courier Journal that Bevin “is ignorant of the medicine and science in child rape cases.”

“If there is a god, Bevin would be struck by lightning immediately,” wrote one. Another tweeted, “Bevin’s merely a taste of what Trump will be like on the way out.”

the only penalty for being odious that politicians like Matt Bevin ever end up paying is the loss of parachute jobs (Heritage, AEI, etc). Pretty confident Bevin just pissed away his Tier 1 opportunities, leaving him only the directorship at the Friends of Groyper Research PAC.

"If it's a legitimate rape, the female body has ways to try to shut that whole thing down."—Todd Akin

"…even when life begins in that horrible situation of rape, that it is something that God intended to happen."—Richard Mourdock

This is today's GOP.

Really, murderers, and rapists makes the community safer. Would you let them babysit your daughter. Take the to a cabin alone… No doubts… 🤔 pic.twitter.com/rrsjMkWcTQ

Kentucky resident here: Matt Bevin has been a goddamn disgrace since the day he was sworn in. He also blamed teachers for child abuse when the teachers went on strike for their pensions

Can we get a gigantic "fuck Matt Bevin" in the house?

Last week, the victim’s mother, who wasn’t named to protect the family’s privacy, told local television station WCPO that the pardon was “a slap in the face.”

She said her daughter, who is now in middle school and spent three years in therapy because of the abuse, had this gut-wrenching reaction to the news that Schoettle was pardoned after serving 18 months of a 23-year sentence for rape, sodomy, and sexual abuse: “Well, it figures, they always get away with it.”