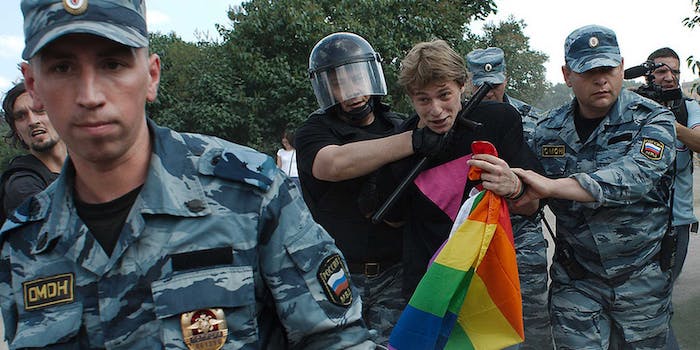 YouTube has become a popular avenue for transmitting some of the worst anti-gay rhetoric and acts of violence in Russia.

Social media has been credited for helping oppressed peoples throw off the shackles of tyranny in many parts of the world. But in Russia, where a violent and ugly crackdown on LGBT individuals continues unabated, one network is potentially adding fuel to the homophobic fire.

YouTube has become an avenue for transmitting some of the worst anti-gay rhetoric in Russia. A lengthy piece at the Kernel details how hate groups are torturing and humiliating gay people on camera and then posting the videos to YouTube.

It’s trend that show’s Russia persecution of the LGBT community in its harshest light. In one video, a group of Neo-Nazis, who’ve tricked a 15-year-old boy into meeting them using a false online profile, force their victim to lay down in the snow and while they hurl degrading comments at him. After 20 minutes, they eventually start beating the teen at which point the video abruptly stops. It is unclear what happened to the boy after that.

What’s most shocking about this particular video is the way it inadvertently depicts Russian attitudes on homosexuality. The abuse is carried out in broad daylight and only a few individuals bother to inquire about what is going on, with none actually stepping in to stop it.

“Strikingly, most of the men aren’t even hiding their faces,” writes the Kernel‘s Theresa Breuer. “A group of women passing the crowd is giving a clue as to why that is: they don’t stop to help the boy,  only to ask him whether he is ‘retarded.’ Then they turn to his perpetrators. ‘Finish him,’ they say.”

And this is far from the only video of its kind being filmed and posted in Russia. Dozens of others are popping up all over VKontakte, a Russian version of Facebook. The video described above was just one of many created by the group “Occupy Pedophilyaj” (Occupy Paedophilia in English). They’re credited with starting this sadistic trend, but since then hundreds of offshoots have developed, at least one in every major Russian city and some of the major ones have thousands of fans.

Though these extreme acts of exploitative abuse are typically coming from skinheads and neo-Nazis, they’ve been able to thrive in Russia thanks to the country’s overall hostile attitude toward gays and lesbians. A Pew Research survey from June found that 74 percent of Russians believed society should not accept homosexuality, a rate far higher than any other European or North American country. And a recently passed law banning “homosexual propaganda” has made it illegal for gays and lesbians to so much as kiss in public.

This cultural attitude means that none of the bullies in these YouTube videos have been arrested or charged with a crime, according to Spectrum Human Rights Alliance.