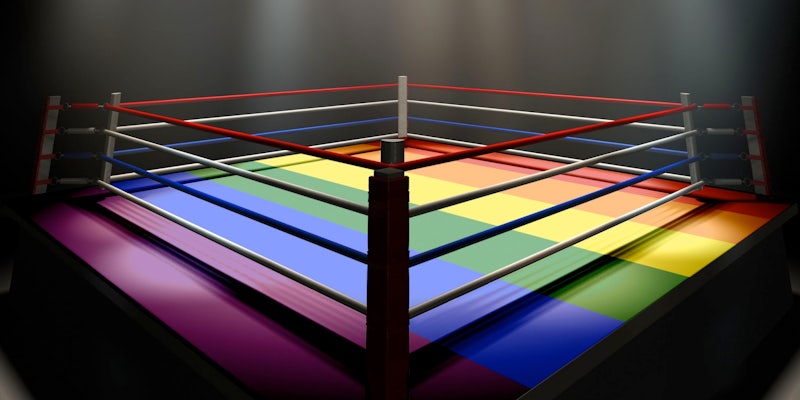 'Absolutely we will integrate LGBT storylines into our programming.'

There have been openly LGBT pro wrestlers, and presumably some in the closet. And while any kind of contact sport is rife with homoerotic underpinnings, there has never been a storyline in pro wrestling about gay protagonists.

All of that could soon change at WWE (World Wrestling Entertainment), the world’s largest pro wrestling association.

WWE Chief Brand Officer Stephanie McMahon spoke with reporters at NBC Out last week at Beyond Sport, a Brooklyn, New York, event that brought together representatives from various sports to discuss diversity and inclusion.

“Absolutely we will integrate LGBT storylines into our programming,” McMahon told NBC Out backstage at the event.

While she said there is nothing in the works at the moment, LGBT storylines or characters are likely to hit the mat in the “near future.”

“Throughout my life I have grown up knowing gay [WWE] superstars and executives,” McMahon said. “It’s always been accepted, but now it’s about getting that message out there.”

McMahon drew attention to gay WWE wrestler Pat Patterson, who remained closeted during his career but later came out on an episode of the reality show Legends’ House, which brought together retired wrestlers to reflect on their careers.

Most of wrestling’s openly LGBT stars came out after they left the ring either to retire or move into other entertainment roles. Rosa Mendes came out as bisexual in 2014 as her career transitioned into a correspondent role and slot on Total Divas. Other wrestling stars, such as 1970s pioneer Sandy Parker, were instructed to remained closeted. In 2008, the openly lesbian Parker told Slam! Sports that her former manager had insisted she never go to gay bars while traveling to bouts.

McMahon recently suggested that wrestlers would be more likely to come out as LGBT and remain open during their careers. After WWE superstar Darren Young came out in 2013—becoming the only wrestler in the organization’s history to perform as openly gay—many wondered whether his character would incorporate an LGBT element as well.

Speaking with the Daily Beast in July 2015, McMahon explained that Young’s coming out had inspired a partnership between WWE and GLAAD—which now helps oversee sensitivity trainings with WWE writers to ensure that, at least, the skits don’t veer into homophobic and transphobic territory. But as far as an LGBT storyline is concerned, it may not happen this year.

“You know, in WWE our storylines are a year long,” McMahon told the Daily Beast. “They don’t go episodic, week to week—they really are the arc from WrestleMania to WrestleMania. So sometimes it takes a little longer than people would like for the seeds to grow. But we’re constantly planting them.”