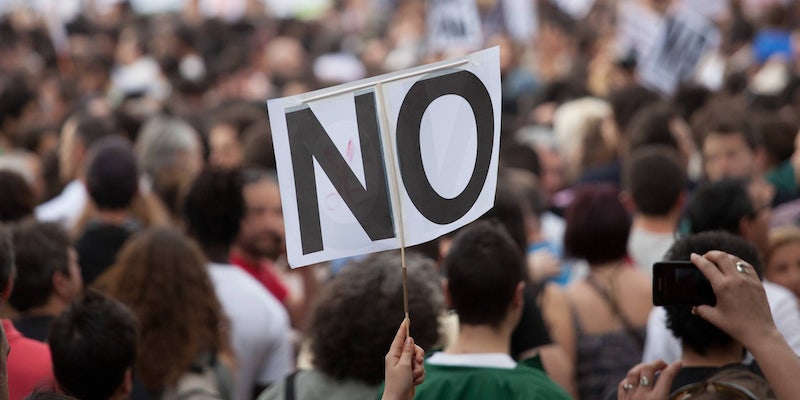 If the number of people who have responded on Facebook is to be believed, the Women’s March on Washington on Jan. 21, the day after inauguration, could be the largest protest against President-elect Donald Trump to date. However, organizers wouldn’t call it that.

In their mission statement, they don’t mention Trump by name, but say they are gathering because “the rhetoric of the past election cycle has insulted, demonized, and threatened many of us—immigrants of all statuses, Muslims and those of diverse religious faiths, people who identify as LGBTQIA, Native people, Black and Brown people, people with disabilities, survivors of sexual assault—and our communities are hurting and scared.” The march, they say, is organized by women, but is open to “all defenders of human rights.”

The march has largely been planned online, where participants can register so organizers can estimate a headcount, connect with other participants in their states and cities, and collaborate on transportation to Washington, D.C. Since its inception, more than 70 organizations have signed on as partners—including Planned Parenthood, Amnesty International, and the National Organization for Women—and Gloria Steinem and Harry Belafonte will serve as honorary co-chairs. While the exact route of the march has yet to be released due to security reasons, it will convene at 10am at the intersection of Independence Ave and Third St. SW, near the U.S. Capitol.

However, not everyone can or wants to participate in the march itself. The first organizers, all white women, initially called it the Million Women March, ignoring that a Million Women March organized by black women happened in 1997. Many felt that the march centered the feelings of white, straight, able-bodied women and not the experiences of those who faced the most threat under a Trump administration. Aside from idealistic differences, not everyone lives near enough Washington, D.C. to go for the weekend, or can afford the travel.

Regardless, Jan. 21 is evolving into a day of political action across America. Alternatives to the march are popping up for those who still want their voices to be heard. Here are a few ways you can participate.

Attend a march closer to you

Women’s marches in solidarity with the D.C. march will be happening in cities all over the country, like New York, San Francisco, San Jose, Oakland, Chicago, Kansas City, Austin, and Seattle. Search Facebook to see if one is happening near you.

If marching is not your thing, others are calling for Inauguration Day on Jan. 20 to be a general strike. Participants don’t go to work and don’t buy anything. “A general strike and boycott, or Sick Out, would be a commitment not to go to work or buy anything on January 20. It would not focus on any single cause or demand; instead, it would be a show of our collective power in opposition to Trump’s extremism,” writes Marianne Hastings for In These Times. And if you feel like it, the strike can easily carry over to the 21st.

Since the march is on a Saturday, your call will probably go to voicemail, but that means you’ll have the space to leave a well-rehearsed message about your hopes, concerns, and expectations for your senators in the new administration. Remind them that they work for you, and that if you’re not happy, you’ll find someone else to support in the next primaries.

It’s easy to get het up about politics at the executive level, but America has an abysmal record when it comes to participating in state and local politics. Which is a shame, because that’s where a lot of direct action can take place, like changing local housing regulations or allocating funds for public schools. By joining your local chapter of Democrats or Republicans, the Democratic Socialists of America, the ACLU, or other groups, you can have more of a say in local politics, and that can radiate to the top.

Whatever action you take, it doesn’t have to be big. Volunteer for the day. Donate some money to a charity whose work means something to you. Encourage a family member or friend to become more politically active with you. And hopefully your actions will have effects beyond Jan. 21.