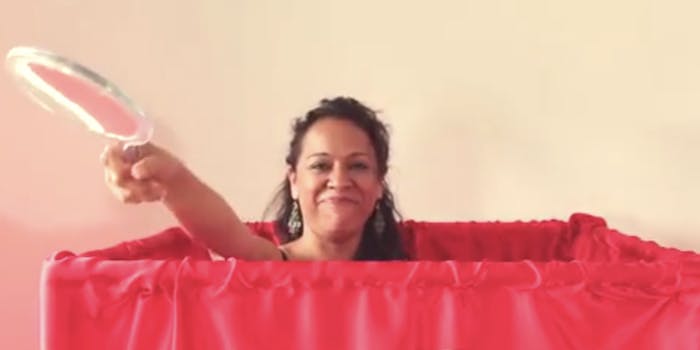 These women are seeing their ladyparts for the very first time

"I just saw, like, a normal vagina. I don't know what I was freaking out about."

Like the moon landing or the Kennedy assassination, if you’re a woman, you probably remember exactly where you were when you saw your vagina for the first time.

But for every woman who’s had at least one up-close-and-personal encounter with her vagina, there’s one who has never seen it before, either because she associates it with some form of personal trauma, or because she had a parent or guardian who cautioned against going down there, or simply because she thinks it’s gross.

YouTube fitness guru Davey Wavey wanted to reach out to these women and show them what they were missing. So he posted an ad on Craigslist looking for women who had never seen their vaginas before, then interviewed them on camera. One said she avoided looking at her vagina after she was raped, while another said a boyfriend had once told her her vagina was “ugly.”

Davey Wavey then invited them into a makeshift “Vagina Booth,” where he gave them a magnified hand mirror and asked them to take a peek:

The women’s reactions in the video are pretty much what you’d expect from someone who’s just seen a part of their body for the first time that they’ve been told to keep hidden: The experience is awkward, a little silly, and more than a little revelatory.

One woman says knowing more about her body has helped her overcome the trauma of being raped, while another incredulously notes hers looks like an “old bald-headed man.” Either way, it’s a really cute and inspiring video. And if you haven’t done so already, it’ll probably make you want to sneak off into the office bathroom and do a little downtown expedition of your own.