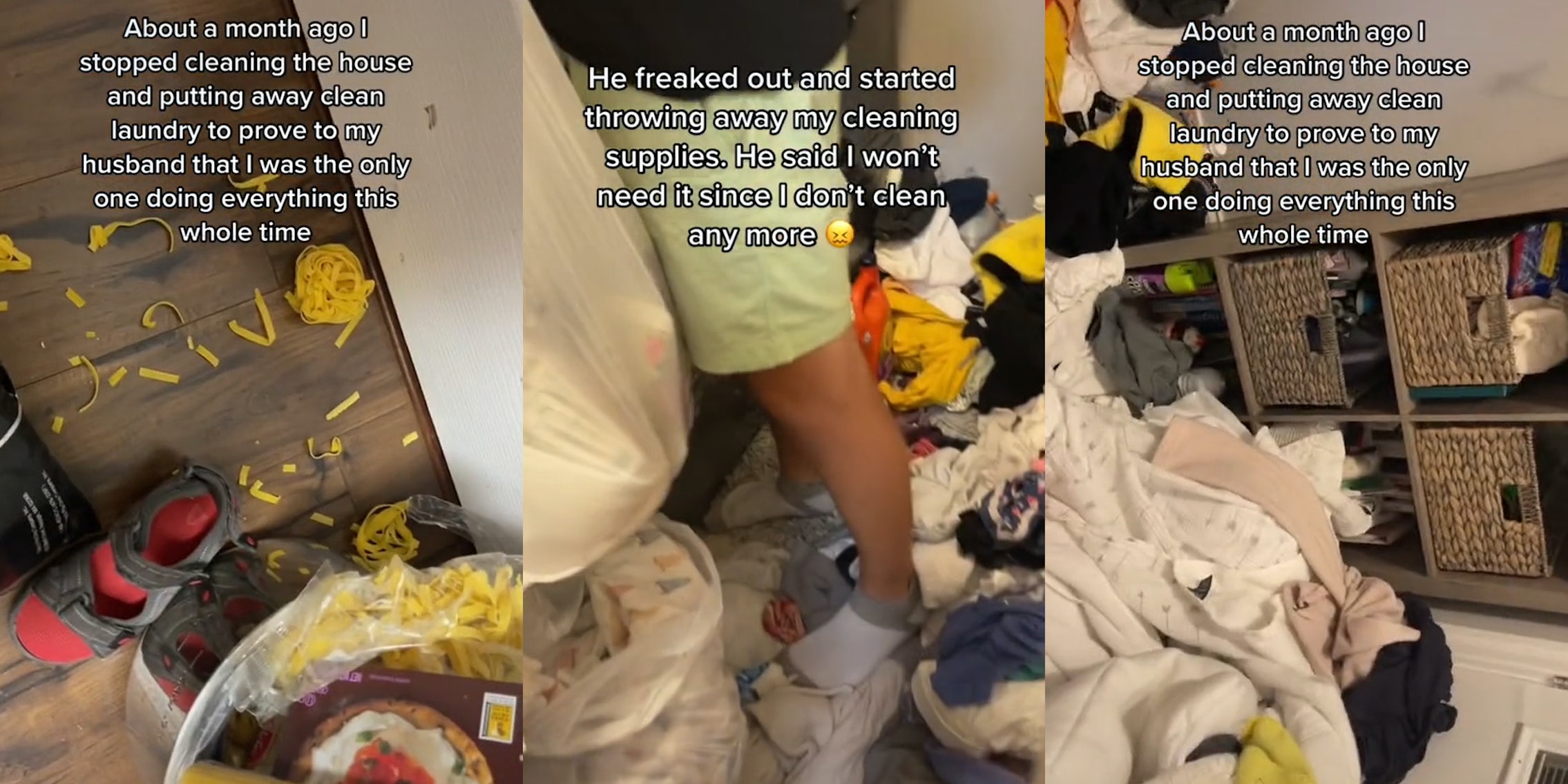 ‘He said I won’t need it since I don’t clean anymore’: Woman says she stopped cleaning up after her husband—so he threw her cleaning supplies away

A woman on TikTok claims she stopped cleaning to prove to her husband that she is the only one putting in the effort to keep their home clean. However, she says he threw away her cleaning supplies in protest.

User @mrsmessytiktok uploaded a short viral clip that shows a messy house with bits of food littered on the floor and stacks of dirty laundry all over the place.

In the clip, the text overlay reads, “About a month ago I stopped cleaning the house and putting away clean laundry to prove to my husband that I was the only one doing everything this whole time.”

As the clip progresses, we see the camera focus on the lower half of what appears to be a man’s body. This is presumably the TikToker’s husband filling up a garbage bag. At first, it looks like he’s actually helping out around the house.

The video, shared June 15, received over 5.1 million views as of Saturday.

Viewers were shocked at the man’s behavior, calling it immature, irrational, and toxic. Many argued in the comments that if the TikToker’s story is true, then she should seriously reconsider her relationship with him.

“Lmaoooo instead of cleaning he throws away the cleaning supplies girl just leave that’s a child not a partner,” one viewer said.

“I thought he grabbed a bag to start helping,” a third noted.

“What kind of logic is that?” a fourth user questioned.

However, some TikTokers argued that a deeper look into the woman’s account acts as a chronicle of her husband’s red flags and a compilation of video evidence as to why she should divorce him.

“For the love of god, i’ve seen all of her videos and PLEASE just divorce him, the red flags cant get any redder,” one user wrote.

Some of the clips refer to more of her husband’s alleged messy habits. In another video, his clothes, belongings, tools, and various other items are shown strewn all over the floor.

Many of the creator’s videos show cleaning tips/tricks, however, she says in one video that she stopped her upkeep of the house weeks ago so her husband can understand the unequal effort she puts in. In other videos, she shares that he allegedly blames her for creating the messes.

The anonymous creator also claims she is not only expected to keep the house they live in spotless, but they also have a newly renovated Airbnb property that she is expected to take care of. The TikToker posted a video of her heading to the property at midnight in order to get it ready for guests.

Despite putting hours of work into the Airbnb rental, the creator alleges her husband refuses to put her name on the title. “I don’t post much lately,” she wrote via text overlay on one video of a blank screen. “I get around four hours of sleep my husband makes me work extra hard on his Airbnb house. He bought this house before we got married, and then he put it under his mom’s name, so this house will never be mine.”

The Daily Dot has reached out to @mrsmessytiktok via TikTok comment, as other methods of contact were unavailable.

If you are dealing with domestic abuse, you can get help. Call the National Domestic Violence Hotline for resources, information, and assistance with your situation: 1-800-799-7233.