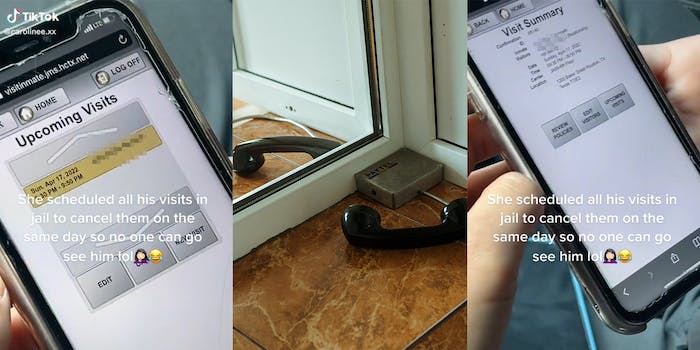 ‘Best revenge ever’: Woman schedules her ex-boyfriend’s jail visits on the same day and cancels them, sparking debate

'Just so no one else could go.'

A viral video that purports to show a woman scheduling all of a man’s jail visits for a day then canceling them so that he cannot see anyone is stirring up controversy on TikTok.

The video, posted by user Caroline (@carolinee.xx), shows a woman on her phone appearing to cancel a visitation with a Texas-based inmate.

“She scheduled all his visits in jail to cancel them on the same day so no one can go see him lol,” Caroline writes in the text overlaying the video.

The video has more than 1.6 million views.

The caption seems to imply that the woman and the jailed man were once in a relationship, as Caroline uses the hashtag “#exboyfriend.”

No matter the crime, in comments, many users supported the move.

“Omg this is so clever!” exclaimed a commenter. “Best revenge ever.”

“Love this,” shared another.

Others said that they had even done the same thing.

“lol I did this when he was only allowed one a month,” recalled a TikTok. “I would book and not show up just so no one else could go.”

“And my mom told me I’m the only person who does this. lmaooooooo. NOT,” added a second user.

“On gawd I’ve done that,” admitted a further TikToker.

Some offered advice on how to make the plan even more dastardly.

“She shouldn’t cancel them,” suggested a commenter. “Let the guards wake his ass up and interrupt him and get him excited to see a visit.”

On the other hand, a few users thought that doing this was too extreme.

“Nah this is EVIL,” stated a commenter.

“So evil,” agreed a second.

“All the girls in this fucking comment section crazy,” expressed another.

In response to these comments and others like them, Caroline offered this in comments: “Some of y’all really feeling some type of way. Doesn’t have kids, Not Married, & The Mom agrees with my co worker… Only in there for a few months, lol like if y’all know the situation. Gets a visit every week by his mom.”

The Daily Dot has reached out to Caroline via TikTok comment.