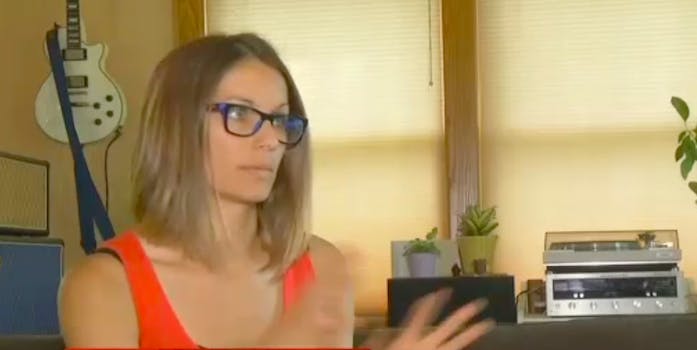 In a month that has seen endless complaints against United and other airlines over how they treat their passengers, another woman has come forward to describe an incident she calls “shameful” on the “worst flight ever.”

Nicole Harper from Kansas City, Missouri, claims that she was forced to pee in a cup on a flight home from Houston, which so happened to be on the same day security notoriously dragged a doctor from a different United flight.

Harper took to Facebook to air her complaint after she says customer service at United—she was flying Mesa Airlines, which operates under United Express—had allegedly given her the runaround. In the post, she details how the crew wouldn’t let her get up to use the bathroom because the fastened-seatbelt light was on. She explained to an attendant that she has an overactive bladder and would either need to get up right then and go to the bathroom or pee in a cup. The attendant then handed her two cups.

According to local CBS station KCTV5, she then squatted in her dress in her seat and, with the help of her husband, relieved herself in the cups. The flight attendant soon returned and ushered her to the restroom, “shaming me down the aisle while other passengers overlooked,” Harper said in the Facebook post. “The flight attendants treated me like I had committed a crime, stating they would be filing a report, calling in the hazmat team to clean the entire row (let me mention there was no mess involved) and told me I would need to talk with the pilot after the flight!”

A United spokesperson said they are investigating the incident and issued the following statement: “Customer safety is always our first priority. Initial reports from the Mesa Airlines flight attendants indicate that Ms. Harper attempted to visit the lavatory on descent and was instructed to remain seated with the seat belt fastened per FAA regulations. At no point during the flight did flight attendants suggest that Ms. Harper use cups instead of the lavatory. We have reached out to Ms. Harper to better understand what occurred.”

Harper’s and United’s stories differ not only over whether she was given the cups by crew members but also when it happened: Harper claims the incident occurred after takeoff; United says it was upon descent. Harper also says others were allowed to use the restroom at the time, just not her.

She says for the rest of the flight, she was treated badly by attendants, and when she filed her complaint right after she deplaned, all she got was silence from the company. However, since her post has gone viral and the local news picked it up, she has heard from a United customer service representative, she wrote in a subsequent Facebook post.

“As an emergency room nurse, I completely understand having a bad day on the job and having to deal with undesirable bodily fluids,” she wrote in the original post. “What I don’t understand is ZERO customer service, if I treated a patient this poorly I would surely have consequences.”