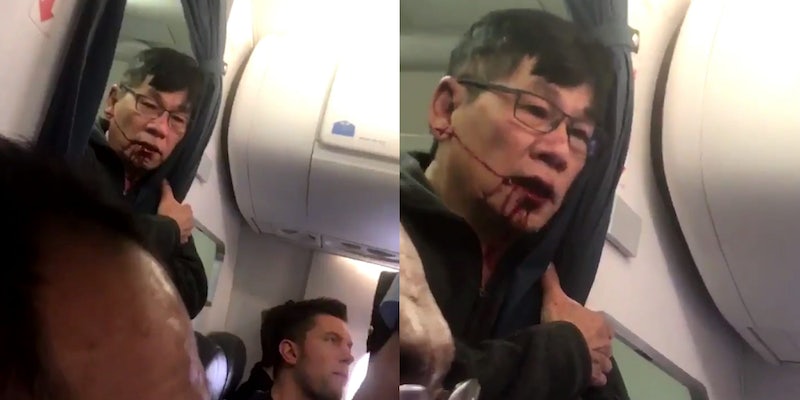 New video has emerged of a bloody and distraught United passenger in the midst of being forcibly removed from a plane due to the airline overbooking the flight.

The latest video adds further details to a shocking incident on a United flight from Chicago to Louisville, Kentucky, as the airline struggles to address increasing public outrage.

The passenger, who has not yet been identified, is seen in the new video injured, visibly upset, and repeating a number of phrases as he paces near the rear of the plane and clings to a curtain. “I need to go home,” the man says in one video. “Just kill me,” he says in another clip. “Kill me.”

#flythefriendlyskies my husband was on that flight. Screw you United!! @united pic.twitter.com/4EcxrMy5jZ

Passengers aboard United Flight 3411 said the man injured himself when he hit his head on an armrest. In a statement, the Chicago Police Department described the man, whom the CPD said is 69 years old, as “irate” and claimed that he “fell” during the encounter with Chicago Department of Aviation security personnel. “His head subsequently struck an armrest causing injuries to his face,” CPD said.

In a video shot by a Flight 3411 passenger, security officers are seen struggling with the man, who goes limp and is subsequently dragged on his back down the plane’s aisle.

Passenger Audrey Bridges, who posted a video of the man being dragged off the plane, told the Louisville Courier-Journal that the man identified himself as a doctor and said he needed to return to Louisville to see patients.

“Everyone was shocked and appalled,” Bridges said. “There were several children on the flight as well that were very upset.”

The incident reportedly occurred after United overbooked the flight and needed four passengers to accept as much as an $800 voucher to take a different flight. After no passengers volunteered, the airline reportedly chose passengers at random. The distraught man was one of them.

In a statement, United CEO Oscar Munoz called the incident “upsetting” and apologized for “having to re-accommodate these customers.”

The Chicago Department of Aviation said Monday that it has placed one of the three security officers involved in removing the man on leave while it conducts a “thorough review.”

“The incident on United flight 3411 was not in accordance with our standard operating procedure and the actions of the aviation security officer are obviously not condoned by the Department,” an Aviation Department spokeswoman said in a statement. “That officer has been placed on leave effective today pending a thorough review of the situation.”