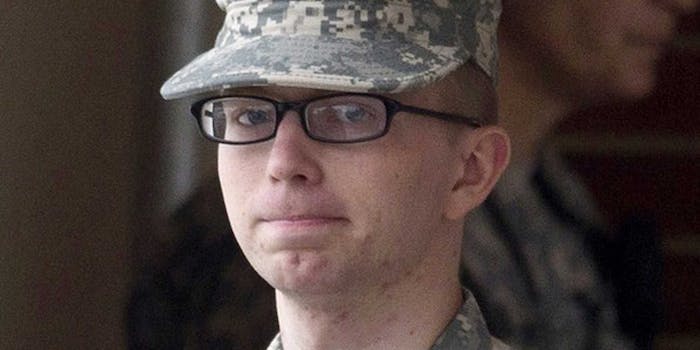 Manning's entry is locked while Wikipedians try to agree on a standard for gender identification.

Wikipedia is the go-to compendium of Internet knowledge, but one thing its editors don’t seem to know is how exactly to handle gender reassignment.

The Wikipedia page for Chelsea Manning, the recently convicted Army private who turned over classified government documents to Wikileaks, has been temporarily locked down while editors and administrators try to figure out how to re-edit her biographical entry.

Just days after being sentenced to 35 years in prison for espionage, Manning made headlines again when she announced to the world that she identifies as a woman and will be seeking hormone therapy, the first step on the road to gender reassignment surgery. She also requested to be referred to as Chelsea, rather than her former name, Bradley, and that female pronouns be used in describing her.

The announcement has generated controversy online as some news organizations continued to use Manning’s former name and male pronouns. Other commenters and bloggers were more overtly derisive of the news, making crude jokes or questioning Manning’s motives.

The Internet’s confusion over how to handle a transgender public figure has manifested itself on Wikipedia. A deluge of edits, switching the article from Bradley to Chelsea and back again several times, forced the page to be placed under “protection” until Aug. 25. Though Wikipedia’s prime directive is to let anybody edit, administrators will sometimes place articles under protection “because of a specifically identified likelihood of damage resulting if editing is left open[.]” While under protection, edits can only be made with the approval of admins.

In its current, locked-down version, Manning’s Wikipedia article refers to her as Chelsea and uses female pronouns throughout. But many editors on the article’s talk page think referring to her by the name she wishes to go by is an uneven application of the online dictionary’s standards.

“Anders Behring Breivik has publicly stated multiple times that he prefers to be referred as ‘Commander Breivik,’ should Wikipedia change his page to reflect his self-identity?,” one user writes, referencing a Norwegian mass murderer.

Many of those who were against changing Manning’s article to reflect her wishes seemed dismissive of the whole concept of gender reassignment. User 74.138.45.132 said the rush by some editors to turn the Bradley Manning article into a Chelsea Manning article “reeks of political correctness.”

Other users opposed to the change however, seemed less interested in dismissing Manning’s actions and more interested in finding some independent, third-party standard by which to arbitrate the matter. Some said that Wikipedia should wait until there has been a legal name change in the courts, others said the article should reflect the news media. Some even pointed toward the fact that Manning still has “Bradley” as part of her official mailing address.

“Shouldn’t we be relying on this individual’s legal name?” writes Floydian. “Does going on the Today [S]how and saying ‘actually this is my name now’ have any validity?”

But user Morwen, who changed the article to reflect Manning’s new name and pronoun, said that gender identity is different than someone trying to confer titles upon themselves. Morwen said that in cases of gender, it’s appropriate to go with self-identity.

“Any person whose gender might be questioned should be referred to by the gendered nouns (for example ‘man/woman,’ ‘waiter/waitress,’ ‘chairman/chairwoman’), pronouns, and possessive adjectives that reflect that person’s latest expressed gender self-identification. This applies in references to any phase of that person’s life.”

Though the main debate concerns simple whether or not the convicted WikiLeaks source’s biographical page should refer to Manning by her old or new name, there are several side arguments cropping up, such as whether female gendered pronouns should be retroactively applied to the time when Manning was publicly known as a man. In another Wikipedia article on a noted transgendered individual, pronouns related to Chaz Bono’s life as a woman are delicately avoided with a heavy repetition of his last name. However, the top of the article says Bono was known as Chastity “through pre-op.”

But ultimately, supporters of changing the page to Chelsea say opponents are acting on behalf of their own prejudices, whether knowingly or unknowingly.