When there was only one set of footprints, somebody stopped to measure them.

It’s a thought that flits through every person’s mind when they see an attractive celebrity: Sure, they’re famous, but what do their toes look like?

WikiFeet, a fan-maintained digital archive par excellence, is sure to have the answer. Sorry, the username Tarantino187 is already taken.

Containing images that date back to the middle 20th century and beyond, Israel-based wikiFeet has the goods on nearly 25,000 women of widely varying renown—which adds up to some 50,000 feet in total. The photos come from magazine covers, film stills, and Instagram accounts alike. In truth, the source doesn’t much matter, so long as the feet are visible. 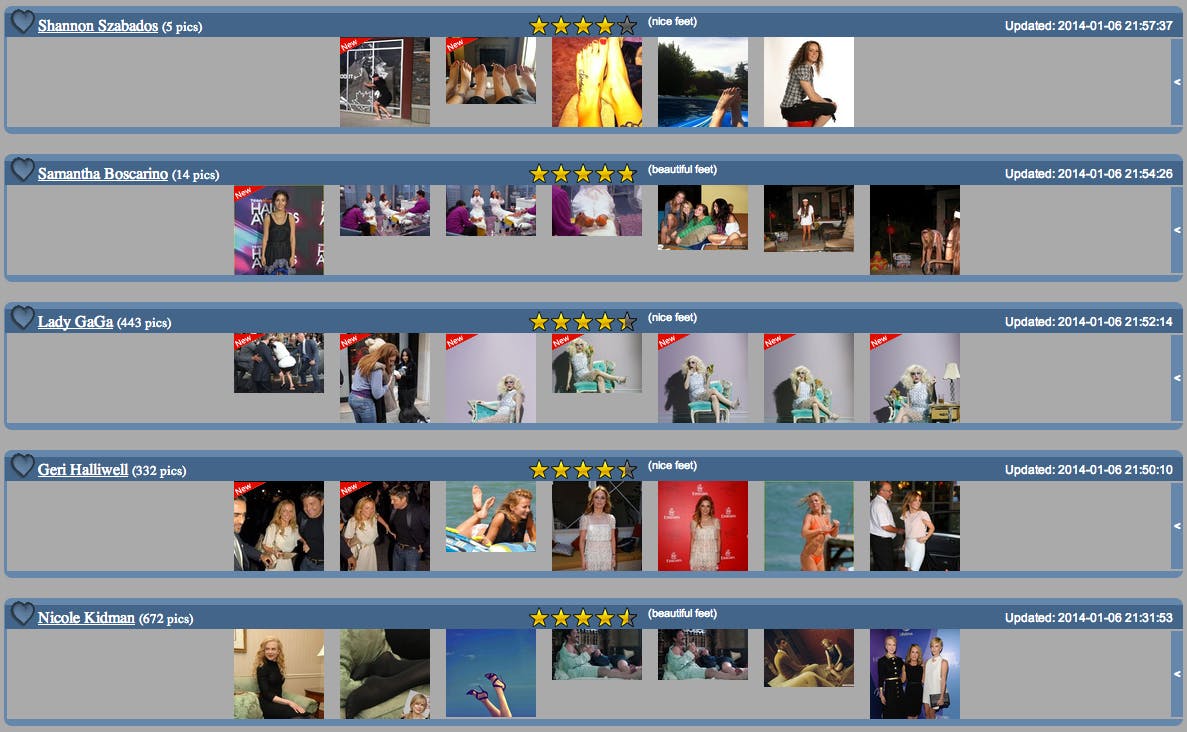 “Ever since I was little I’ve always appreciated beautiful female feet,” wikiFeet founder and webmaster Eli Ozer explained to the Daily Dot in an email, “and whenever I saw a movie I used to wonder how the heroine’s feet look like, if they are as perfect as she seems to be.” In 2008, noting that there was no website devoted to celebrity feet, he built one for his own use, eventually opening it to other enthusiasts. “I never imagined it would become my main source of income,” Ozer confesses—but it now records 220,000 visits per day.

You’re invited to submit your own findings—anonymously, the site notes—for a shot at the “top uploaders” list, or just rate the feet already up on display. Currently, the highest-ranked feet on wikiFeet belong to Emma Stone, a position of prominence she’s managed to maintain “even though being number one has attracted many haters who reported her feet as ugly out of spite,” Ozer says. Stone even mentioned the site in a magazine interview. She’s followed, in order, by Mila Kunis, Rachel Bilson, Ariana Grande, and Emma Watson; relative youth seems to be a critical factor.

But for the more discerning gentleman (or gentlewoman), two new features may prove enticing: You can now search by nationality or shoe size. And when you’re tired of static images of feet, there are plenty of YouTube clips to comb through. Watch a yoga guide, or a toe-wrestling video, or foot fetishist favorite Olivia Munn describing her introduction to the turn-on.

Assuming you aren’t perusing the non-famous appendages at the offshoot forum Public Feet, every entry in the database links to an IMDb page, so we can gain a finer appreciation for these women as creative professionals. They’re more than just their feet; they also make movies and music videos, any one of which might feature their feet! There’s even a recommendation engine at work: If you’re a fan of Anna Faris’s feet, for example, you may like Elisha Cuthbert’s.

Ozer gets involved in some strange correspondence: some men give him their phone numbers, thinking he’s one of the featured celebrities. Another asked for his help in finding a marrigeable Indian woman. By and large, though, he receives heartwarming emails from people who realized, through his site, that they’re not alone in loving feet, and were able to shed the notion that such a fixation is shameful or freakish.

Sadly, all these opportunities to share and discuss celebrity feet photos have created perhaps too free an atmosphere. The ability to write on a subject’s “wall” is disabled at the moment. “Lately the walls have become filled with vulgar and hatefull [sic] messages, which in no way represent the views of our community,” an explanatory message from Ozer reads. “In an attempt to bring this bhaviour [sic] to a stop, I’ve decided to rethink the whole commenting section.”

Come on, guys. Surely it’s possible to critique feet without getting totally out of hand.