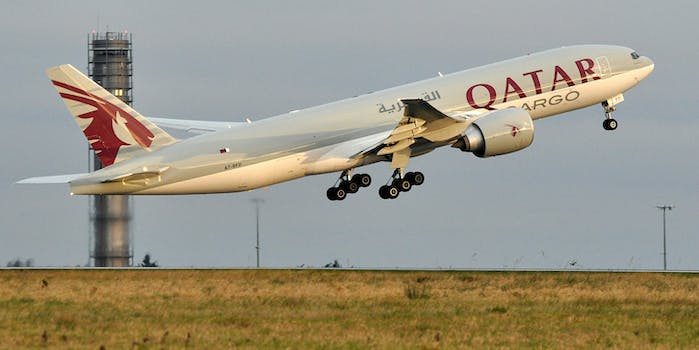 She was reportedly drunk, distraught, and kicked off the flight.

A Qatar Airways passenger inadvertently forced a plane to make an emergency landing after she allegedly became distraught with proof that her husband was having an affair.

During a Doha-Bali flight over the weekend, an Iranian wife reportedly used her sleeping husband’s thumb to unlock his smartphone. She soon found proof that he was cheating on her, according to the Times of India, and began arguing with her husband over the alleged affair. It probably didn’t help that the passenger was reportedly drunk.

Soon enough, the couple’s fight allegedly spiraled out of control, and the wife became difficult with crew members as they tried to calm her down. So instead of keeping the family on board for the entire flight to Bali, the pilot landed the plane in Chennai, kicked off the husband and wife along with their child, and the flight continued on its way.

“On Nov. 5, at about 10am, Qatar Airways flight QR-4962 (Doha-Bali) was diverted to Chennai,” a Central Industrial Security Force official said to the Times. “A lady along with her husband and a child, all Iranian nationals, were offloaded by Qatar Airline… They were sent to Kuala Lumpur by Batik Air flight 6019 for further travel to Doha.”

Suffice to say, the entire story quickly went viral, with many praising the wife for calling out her husband’s cheating in a very epic way.

Just imagine getting your plane grounded because of this idiot's infidelity. https://t.co/3aIMx9KRsO

Well, that’s embarrassing, and well deserved. She should be praised.

This isn’t the first time an unruly passenger went viral. One Delta flight attendant had to pacify a passenger with a wine bottle over the head, and a drunk passenger who downed a bottle of Duty-Free alcohol was restrained to his seat on a flight headed for New York after he tried assaulting passengers. 2017 has been a year full of hard-to-believe in-flight stories.