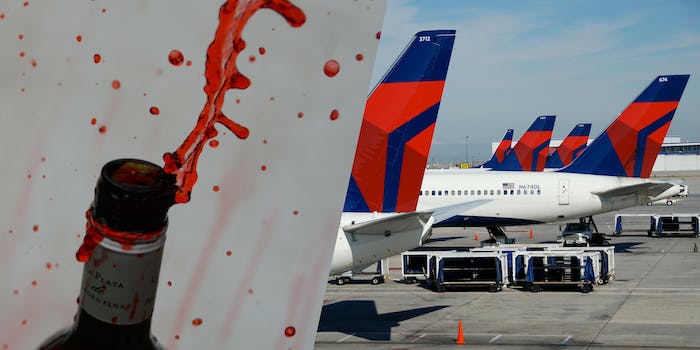 The tweeted photos of the aftermath are disturbing.

A flight attendant attempting to subdue a first-class passenger who lunged for the emergency exit door hit him over the head with two wine bottles, breaking one of them. And yet, the impact didn’t stop him from resisting restraints from other attendants and passengers.

According to the Associated Press, 23-year-old Joseph Daniel Hudek IV was arrested in Seattle on Thursday after creating a disturbance during a Delta Air Lines flight to Beijing. He appeared in U.S. District Court on Saturday and was charged with interfering with a flight crew, which holds a maximum of 20 years in prison and a $250,000 fine.

Here's a picture of the Delta Flight 129 cabin after Joseph Hudek assaulted 3 people last night, according to court documents. pic.twitter.com/EZ4GoZFXmr

According to a probable cause statement written by FBI special agent Caryn Highley, Hudek had been seated in the first row of first class. An attendant said he was served a beer before takeoff, but he showed no signs of being drunk and didn’t order additional drinks.

About an hour into the flight, Hudek went to the restroom, came out quickly, asked the attendant a question, and then went back in. The second time he came out two minutes later, he charged for the exit door and attempted to open it. Two attendants grabbed him, but he pushed them away.

The attendants signaled for help from passengers and notified the cockpit, but Hudek proceeded to punch one attendant twice in the face and hit at least one passenger with a red dessert wine bottle. That’s when the attendant took two of the bottles and hit Hudek over the head with them, breaking at least one.

However, the force didn’t appear to phase him. Instead he shouted, “‘Do you know who I am?’ or something to that extent,” the attendant said.

One passenger got Hudek into a headlock, which he broke out of, but then he was restrained again long enough to be zip-tied. Hudek stayed combative, however, requiring multiple passengers to restrain him until the flight returned to Seattle-Tacoma International Airport.

After the plane landed, Hudek was seen being rolled into the terminal in a wheelchair and yelling for help. One flight attendant and a passenger were taken to a hospital for non-life-threatening facial injuries.

Hudek is expected to remain in custody until his detention hearing on July 13.