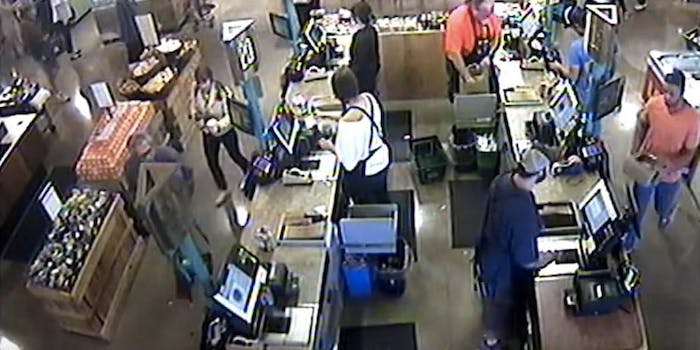 The store posted security camera footage of the purchase to YouTube.

On Tuesday afternoon, Whole Foods announced that it plans to take legal action against an Austin, Texas-based pastor who accused the store of writing the anti-gay slur “fag” on a cake he purchased there.

After Pastor Jordan Brown tweeted a picture of the offensive cake on Monday and told the Daily Dot that he had filed a lawsuit against the health-food-market chain, his story quickly went viral.

JUST IN: Here's statement from @WholeFoods on the "Love Wins" cake. (too long to tweet) pic.twitter.com/D0v637i1Wm

On Tuesday, a Whole Foods spokesperson told the Daily Dot that the company believes Brown’s claims are fake.

“After a deeper investigation of Mr. Brown’s claim, we believe his accusations are fraudulent, and we intend to take legal action against both Mr. Brown and his attorney,” the company said in the statement.

The chain also posted security-camera video of Brown purchasing the cake at an Austin location on its YouTube page. In the video, the price sticker for the cake appears to be on the top of the box.

But in an earlier video that Brown shot, posted to YouTube on Monday by his attorney Austin Kaplan, the sticker is on the side of the box—which Brown said is evidence that he never opened it.

“As you see,” said Brown in the video, “I have not opened up this box yet. It is still sealed.”

Brown also displayed the receipt for the cake in the video. He told the Daily Dot on Monday that when he called to request a cake with the phrase “love wins” written on it, an employee initially “snickered” at him.

Brown said that he had ordered the cake for a member of his congregation at the Church of Open Doors, a non-denominational LGBT-friendly church that he founded in Austin. He described being very emotional when he saw the slur on the cake.

“It was just so humiliating and offensive,” Brown told the Daily Dot. “When I called the manager, I was literally crying.”

But on Tuesday, Whole Foods insisted that not only are offensive phrases banned from its bakery, the employee Brown is accusing of writing “fag” on his cake is also a member of the LGBT community.

“That’s exactly how the cake was packaged and sold at the store,” the company told the Daily Dot. “Whole Foods Market has a strict policy that prohibits team members from accepting or designing bakery orders that include language or images that are offensive.”

“We stand behind our bakery team member, who is part of the LGBTQ community,” continued the Whole Foods spokesperson. “And we appreciate the team members and shoppers who recognize that this claim is completely false and directly contradicts Whole Foods Market’s inclusive culture, which celebrates diversity.”