Who Pays Influencers? is trying to keep ‘influencer’ from being a dirty word

There's nothing wrong with the hustle.

As more and more people rely on freelance and contract work to pay the bills, the issue of just who gets paid what for what jobs has become an important topic. Sites like Who Pays Writers? outline standard rates for various publications, and organizations like NO!SPEC are creating movements against providing creative work for free.

Now Who Pays Influencers? is outlining just how much money can (and should) be made by being what many brands define as an “influencer.”

getting some really interesting submissions, rolling them out slowly as they come in.

According to site founder Amber Discko, who also started Femsplain, an “influencer” is a catchall term many companies use for creative people that have found a following on social media. “I think what brands think of as an influencer is people who can promote whatever it is they’re trying to get out there to a large audience,” Discko told the Daily Dot, whether that’s an illustrator who has built a strong social media following, or people who “aren’t by definition artists, but they do create something that people are willing to follow and support them for.”

Discko was inspired to start the site, which launched Thursday, after reading an article on Digiday. In it, an anonymous “social media executive” spoke about how companies don’t seem to know how to utilize influencers, and makes the industry out to be a pretty big mess.

“We threw too much money at them and did it too quickly,” the executive said of influencers his company used, and cited that some YouTube influencers charged upwards of $300,000 for content. Companies don’t know what they’re looking for, or what to pay, the source said, and “influencer agencies” don’t seem to be much help either. “They sort of just expect the brands to approach them. They don’t pitch them or anything.”

Discko said she read the article and feared for her friends and colleagues who are trying to make money with their creativity. “I see someone taking this to their boss and asking if they should do an influencer campaign, and them deciding no. And that hurts artists.”

So she and artist Julian Glander took a page from Who Pays Writers? and started accepting anonymous submissions about influencer work.

The site will certainly help creatives curious about what companies pay and which companies have solid working conditions. But Discko also hopes it can be a resource for companies too—in that they can learn there are intelligent ways to utilize artists and influencers. Ways that don’t involve “$300,000 for a few photographs because the CEO’s kid liked someone,” as was mentioned in Digiday.

Who Pays Influencers? separates posts by “positive” and “negative” tags, and the “positive” posts are full of stories of companies paying fairly, on time, and not saddling their artists with unreasonable expectations. In fact, most of the posts so far fall under the “positive” category, though the “negative” ones are pretty unfortunate. 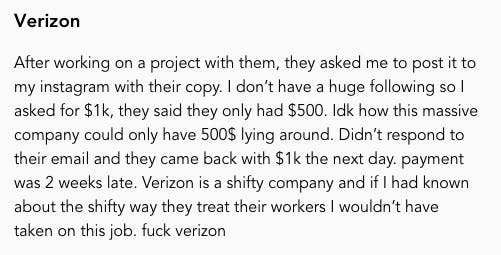 The word “influencer” leaves a bad taste in many mouths, partially because it reeks of money for nothing, and partially because it feels sneaky. Most of us like to know when we’re being advertised to, and the thought of Instagram personalities, YouTubers, or even friends being paid to be seen using a particular face mask or drinking a certain brand of whiskey sows seeds of distrust.

Some of the jobs listed on Who Pays Influencers? seem pretty straightforward—money for illustration work, gifs, or photography. But others seem dishonest, or at least ambiguous, like $700 for “10 abstract Instagram posts.”

No longer responding to accusations that I am an influencer

However, the reality is that creative people need money to do other creative things, and brands tend to have that money. And there is an aspect of creativity involved in everything under the “influencer” umbrella. “It might not seem like that, but there is an art to the perfect Instagram post. These people have found a way to monetize that,” said Discko.

This was something she learned from her previous job at Tumblr, in which she worked with artists from the side of the brand. “Brands have these million-dollar budgets,” she said. “There’s so much money there, why not give it to people who could actually change people’s minds?”

It may be strange to lump together artists and “influencers,” but it’s also hard to draw a clear line between them. We may be mad at those whose careers seem to be about gaining Instagram followers, but no one would be following them if there wasn’t something of value there.

As for the more “traditional” artists who might cringe at such a thing as “influencers”? Well, artists have rarely been able to eat without the kindness of corporate commissions. And Discko hopes with Who Pays Influencers? that creatives can get paid without feeling like they’re totally selling out.

“I’m getting a lot of really great data,” she said, “so I want people to take this and do something with it. I want it to be better.”