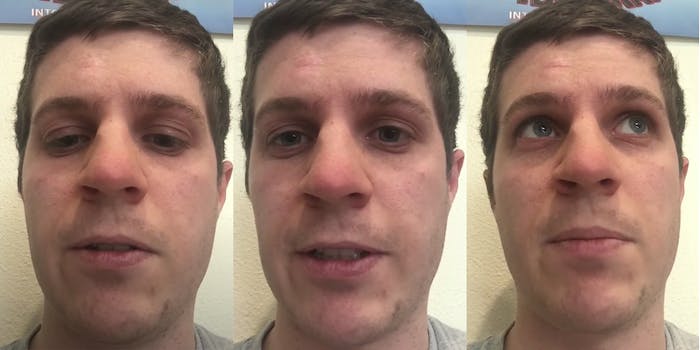 The backlash came after the actor defended a white cosplayer.

A white voice actor was slammed on Twitter for defending a cosplayer who stole a Black artist’s look. Amid the controversy, the actor further incited rage after Twitter users found that he voiced a Southern Black woman in an audio essay.

The actor, Kevin Rineer, came under fire on Twitter on Monday after tweeting in defense of @cohlsworld. The content creator received backlash when a Black makeup artist, Dylan Davis, accused the influencer of copying his Halloween makeup look.

When Davis took to Twitter to express his frustration and disappointment, Rineer stepped in to seemingly defend the white influencer.

“I don’t understand it myself, since they’re cosplaying the same character and doing the character’s same pose,” the Washington-based voice actor tweeted out Monday afternoon in response to Davis.

Shortly after posting the tweet, many criticized Rineer for downplaying the significance of the issue considering the historical backdrop of white artists routinely stealing ideas and intellectual property from Black artists.

“Hey bud… You’re probably not the best to speak on this,” one user said.

While Rineer was catching flack for his defensive tweet, users discovered that Rineer voiced a Southern Black woman for an essay called Da Art of Speculatin’ published by Fireside Fiction Company. The author of the essay, Regina N. Bradley, shared her thoughts.

“WHAAAAAAAAT THE FUCK IS THIS FAKE ASS JAMAICAN ACCENT THO,” the author, who also goes by @redclayscholar on Twitter, tweeted on Tuesday. “What BLACK WOMEN AND SOUTHERN BLACL FOLKS SOUND LIKE?!?!?!”

Others were let Rineer know their thoughts about the situation, with one user stating that it was no big surprise that he defended @cohlsworld. “This take makes sense coming from someone who thought they could cosplay as a Southern Black woman,” the user said.

When the Daily Dot reached Rineer for comment, he referred to an apology video posted to YouTube on Tuesday. He addressed Bradley directly, saying he would be “happy to apologize” over a phone call.

“You might recognize me as a gigantic fuck-up,” Rineer says in the video. “I know that it was completely inappropriate for me to record, especially with that accent … It was horrible, disgusting, and a complete miss.”

Pablo Defendini, the publisher of the Fireside Fiction Company, tweeted an apology on Tuesday morning acknowledging the decision to hire a white voice actor to narrate the essay was “racist” and “violent.”

“That was ridiculously careless, and frankly, racist—it’s blackface, it’s violent, and it’s insulting. I apologize,” Defendini wrote. He also said he took full responsibility for the incident and reached out to the author and editor of the book to apologize and “make sure that they can be part of the process of making this right if they want to be.”

Fireside Fiction did not immediately respond to the Daily Dot’s request for comment. By Tuesday evening, Rineer’s reading of Bradley’s essay had been removed from its website.

In a tweet, Bradley said the act was “unforgivable.” “I saw the apology,” Bradley wrote. “I don’t care. I am angry. Seething from centuries of silenced Black women angry. The voice I speak with and write with is not my own. To have that taken away is unacceptable.”