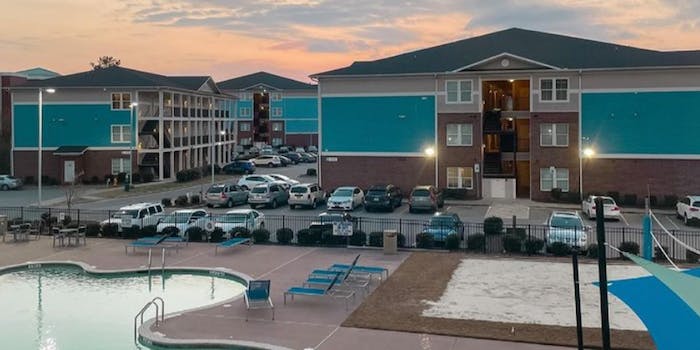 Parents of residents slammed the complex for its lack of diversity.

A photo of a sign calling for exclusively “white tenants” was posted on the Instagram page of a South Carolina apartment complex after the account was “surreptitiously taken over,” according to apartment management.

Twitter user @Itssimplym3 shared a tweet with a screenshot of the Instagram page for the Coastal Club Student Living complex in Red Hill, South Carolina. The now-deleted post featured a black and white signboard that reads: “We want white tenants in our white community.”

“My apartment complex posts this like 10 mins ago,” the user wrote along with the photo on Sunday.

The user initially responded to the Daily Dot’s request for comment but did not respond to follow-up questions. The photo has since been retweeted almost 10,000 times.

On Sunday, Coastal Club Student Living shared a post that said “no room for racism” and condemned the earlier post.

“Early this morning we were made aware that our Instagram account had been surreptitiously taken over and consequently, a hateful post had been placed on our community feed,” a part of the statement read.

The statement also said the business would work with the nearby Coastal Carolina University and assist authorities.

As of Monday afternoon, the comments section was disabled on recent posts on the Coastal Club Student Living Instagram page.

The apartment complex, which is rated an average of 4 stars out of 5 on Apartments.com, is mostly occupied by students who attend Coastal Carolina University in Conway, South Carolina. The complex’s proximity to the university is touted numerous times on its website.

According to a 2020 report, nearly 67% of students at Coastal Carolina University were white, and almost 18% of students were African Americans. Students of other ethnicities make up less than 3% of the population.

A glance at Coastal Club Student Living’s Instagram page also shows this: The posts feature mainly white students and a few students of color. This was noticed by at least one parent who shared their grievances on the Facebook post by the apartment complex on Sunday.

“As a parent of a resident there, I am appalled. The apology is standard..yet needed,” the parent wrote. “Your social media pages usually only reflect your Caucasian residents; therefore, along with this apology I will expect to see more diversity and inclusion in the immediate near future when representing your property!!”

“As a parent I am outraged. My daughter rent is paid monthly,” another user commented. “She deserves to stay wherever she want. We need more than this response that is posted.”

Some felt that the students of color should be compensated financially.

“Make sure all black tenants get their money back. Close the apt complex and move everyone to a safe place. Again refund everything,” one Instagram user wrote.

“You guys need to give the a free year of housing!! If not, then we will go a step farther!” a Facebook commenter said.

Coastal Carolina University shared with the Daily Dot an email sent to faculty, students, and staff from the vice president of the department that manages lists of off-campus housing. The email said the listing for Coastal Club Student Living will be removed from the university’s website for off-campus housing until further notice.

“CCU remains committed to inclusivity and safety for every member of our community and condemns in the clearest and strongest possible terms racism and discrimination in all forms,” Stephen K. Harrison said in the statement.

Harrison also said the company sent a “time-sensitive” request to the apartment complex for more information about the incident.