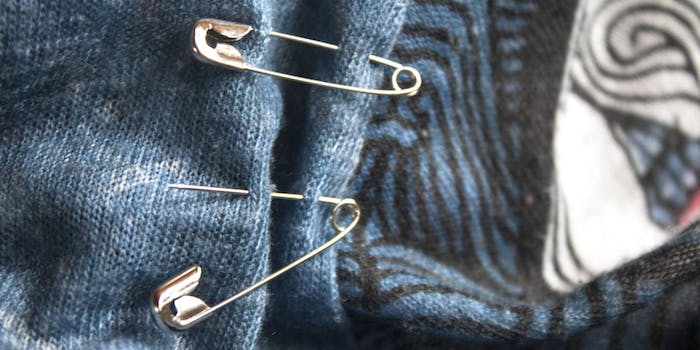 Trump supporters are trolling the safety signal for minorities, women, and LGBTQ people.

The “safety pin” movement has been subject to criticism among liberals, leftists, and anyone whom it would presumably be used by. The idea—wearing a safety pin to signal that you’re a safe person to approach if someone is experiencing racist, sexist, or other types of harassment—was inspired by the British, who wore them as a symbol of solidarity for Muslims and refugees after the Brexit vote.

However, many say that it’s a form of passive support, putting the onus on the abused to seek out someone wearing a safety pin rather than making allies take direct action.

Now, there may be another reason why the safety pin movement is questionable, however. White supremacists might be co-opting it.

A tweet by Zoé Samudzi began circulating this weekend with screenshots, one from a 4chan board, calling for white supremacists to wear safety pins as a way to trick people looking for a safe space, or as a symbol of their racist beliefs, thus confusing the safety pin’s meaning.

[TW: Nazis, white supremacists]
Unsurprisingly the hypervisible symbol of solidarity has been co-opted by white nationalists. Be careful. pic.twitter.com/NCI84vDJv1

On Reddit, Trump supporters have started multiple threads about wearing safety pins on their “Make America Great Again” hats or on their guns.

The safety pin movement spread on social media, so there are plenty of marginalized people and allies who aren’t glued to Twitter who probably don’t know what it means. And perhaps that niche is why it’s so easy to co-opt.

All this confusion regarding the meaning and efficacy of the pin is another reason to take active measures to step in when you see injustices happening. That will mean more than a safety pin ever could.