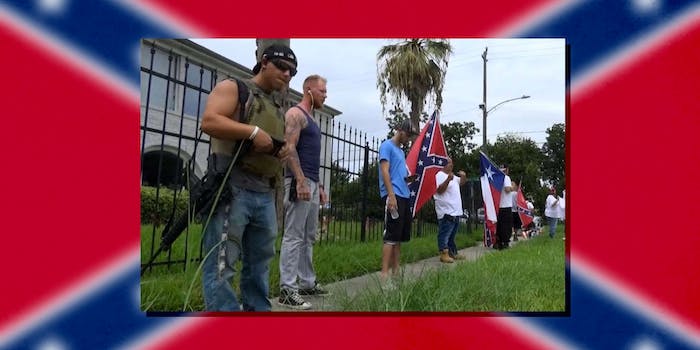 It looked like a scene out of the 1950s on Sunday, as white supremacists held an armed protest outside the National Association for the Advancement of Color People (NAACP) headquarters in Houston. Protestors waved Confederate flags, held a banner that read “White Lives Matter,” and carried signs referencing the neo-Nazi slogan “14 Words” (the 14 words being, “We must secure the existence of our people and a future for White children”).

NAACP President and CEO Cornell Brooks responded to the protest with a series of steadfast tweets, saying the civil rights organization was not intimidated.

Deeply disturbed by protests outside @NAACP offices in #Houston. Its wrong on all counts. https://t.co/P8VYj818I8 cc @CornellWBrooks

At the rally, which was surrounded by about a dozen police officers on horseback, white supremacist Scott Lacy told local news station KPRC: “We came here because the NAACP headquarters is here and that’s one of the most racist groups in America.”

One of the protestors on the white supremacist side, Billy Gaston, told KPRC he was there because “it seems like, in the country today, it’s always wrong to be white.”

“It’s a physical manifestation of white supremacy, white privilege, and racism being protected by this country,” an unnamed woman told KPRC as she gazed at the scene of police protecting white supremacist protestors.