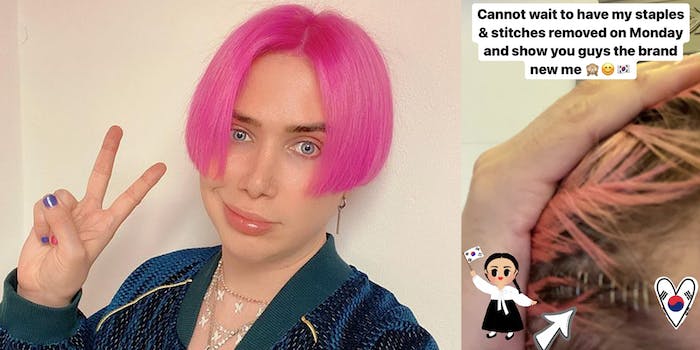 Oil London has had over 15 surgeries to 'look Korean.'

White Instagram influencer Oli London was accused of appropriating the South Korean flag and trivializing identity after coming out as nonbinary on June 16. In an Instagram post, they stated that their pronouns were “they/them/Korean/Jimin,” referring to K-Pop star and BTS member Park Ji-Min.

London has had over 15 surgeries to make them look like a K-pop star, according to the Daily Mail.

“I do identify as Korean,” London said in a YouTube video on Monday. “This is my choice, my decision. It’s not hurting anyone.”

The British influencer tweeted on June 18 that they are a nonbinary person who identifies as Korean, stating that, in addition to “they/them,” they also use “kor/ean.”

London also posted an image of a flag with the same shapes as the Korean flag but with the rainbow colors of the LGBTQ pride flag.

“This is my new official flag for being a non-binary person who identifies as Korean,” London said in the tweet.

“As a Korean Queer, shut the fuck up,” one user said.

“As a Korean this is really pissing me off right now,” another wrote. “Nationality is not that simple. I don’t care (if) you identified yourself as a Korean or not. Just stop insulting our national flag. It means a lot more than you think.”

Another user quote-retweeted London’s post with a graphic explaining the meaning behind the Korean flag. “Please do not insult every Korean by using a Korea flag for profit,” the user wrote said.

London’s manager, who identified himself only as Scott, told the Daily Dot in an email that the flag London posted officially represents LGBTQ Koreans.

“Regarding the flag that Oli posted, it is the official LGBT flag of South Korea and therefore the official representation of those who identify as LGBT from Korea,” he said. “Therefore, people’s criticism that Oli created the flag and dishonoured Korea are false, incorrect and hurtful.”

In their YouTube video response, London said those who criticized their use of the flag were “disguising their homophobia.”

An image of the Korean flag with rainbow colors was posted on Reddit in 2015, citing it as the “LGBT flag of South Korea.” However, the origins of the flag are unclear.

Many social media users also criticized London’s use of “Kor/ean” and “Korean/Jimin” as pronouns and said that using them to express a transracial identity is offensive. “Neopronouns” third-person pronouns that are not officially recognized in a particular language. “Ze” and “zir,” for example, indicate gender neutrality.

“Kinda makes us neopronoun users look a bit like a joke and i feel quite invalidated ngl,” one user said.

“You may fetishize koreans but you’ll never be a korean,” another said.

“Idc if they’re nonbinary, doesn’t change the fact that they’re a white person pulling this stupid shit,” a user said.

London’s manager told the Daily Dot that it was difficult for London to come out as nonbinary, but they felt it was important to share their identity with the world during Pride Month.

“Besides from identifying as gender fluid and nonbinary for the past several years, Oli has also felt strongly attached to Korea and the Korean culture and feels much more connected to this than his own culture,” Scott said. “He hopes that people will accept and love him for who he is without judgment.”

In the YouTube video, London called out “woke people” for criticizing their identity, calling them “hypocritical.”

“The only people that need to be cancelled is the woke people,” they said. “Because they are so dangerous to freedom of speech in society.”