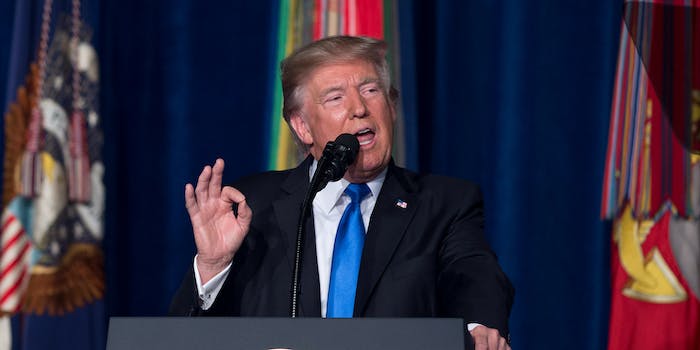 Did the Trump White House website ‘quietly remove’ a 2014 sexual violence report? Not quite

That doesn't mean critics shouldn't be concerned about Title IX protections, though.

If you’re searching online for the White House‘s 2014 report on rape and sexual assault, the current administration’s website is the last place to look—but not because President Donald Trump has recently “quietly removed” the publication from its website, as critics have recently claimed.

The report, “Rape And Sexual Assault: Renewed Call To Action,” was created by the Obama administration’s Council on Women and Girls in 2014. It spans information on sexual violence including the mental, emotional, and economic impacts of sexual assault, and analysis of how the legal system and college campuses can better address sexual assault and gender violence.

Since Trump’s inauguration as president, the report has gone absent from the White House website. That much is true. However, the report was wiped from the website and archived into a separate website for the Obama White House, along with references to “climate change” and “LGBTQ rights” (though a search of the Trump White House website reveals results for these searched terms). This can be seen in a cached archive, which shows that after Jan. 19, the web address for the report resulted in 404 error.

While the document’s removal was planned, some people now noticing its absence have criticized the change. According to HuffPost, Alexandra Brodsky, a civil rights attorney and co-founder of KnowYourIX, a Title IX advocacy organization, made the discovery on Wednesday after searching for the report herself while preparing a briefing for a client who’s a survivor of sexual violence.

“…Taking it down is really a discouragement from action,” Brodsky told HuffPost. “That’s particularly troublesome when we know that the administration is actively considering undermining important policies for survivors like those reaffirmed by the Obama administration regarding Title IX.”

Brodsky questioned the removal of this government-funded report: “What does it mean that the Trump administration doesn’t want the public to have that information?”

The removal of the document isn’t necessarily news within itself, and the report is still accessible from the White House archive. However, that doesn’t mean Title IX advocates shouldn’t be concerned about the Trump administration’s attitude toward civil rights protections.

Last month, 20 Democratic attorney generals sent a letter urging Education Secretary Betsy DeVos to maintain Obama’s 2011 “Dear Colleague” directive on sexual assault investigations under Title IX. The letter came in response to the comments of Canice Jackson, the current head of the U.S. Department of Education’s civil rights office, who said that 90 percent of all campus sexual assault allegations “fall into the category of ‘we were both drunk’ ‘we broke up, and six months later I found myself under a Title IX investigation because she just decided that our last sleeping together was not quite right.'”

Earlier this week, Jackson was reported to be considering a process to overhaul and reevaluate the directive and Title IX protections altogether.

The White House did not reply on the record to a request for comment.