The man who brought edible food stadiums to the Internet tells its origin story.

It’s likely you’ve seen a Super Bowl snack stadium somewhere on the Internet this week. A newly released commercial for Amazon Echo features Alec Baldwin and a snack stadium. Pinterest is littered with DIY snack stadium tutorials by everyone from novice food bloggers to Rachael Ray. But what exactly are snack stadiums?

The edible football stadiums tend to be bedecked with fields of guacamole. The yard markers could be sour cream or bean dip. Goal posts could be Slim Jims, pretzels, Vienna sausages, or practically any snack in the shape of a stick. Potato chips, Cheetos, M&Ms or other munchies stand in for the crowd.

Snack stadiums are equal parts architectural marvel and gluttonous freak show. They are 12,000 calories of lovingly sculpted grocery store aisle snack food; both a delight to behold and a horror to fully comprehend. Snack stadiums are the logical conclusion of when mainstream Americana meets Pinterest kitsch. And they are likely to be coming to a Super Bowl party near you. Google Trends indicates that interest in snack stadiums began around January 2009 but dramatically skyrocketed this year. Blame Pinterest, celebrity chefs, or the interest of corporations like Amazon and Pillsbury, but it appears that the snack stadium is here to stay.

From where did snack stadiums, also called snackadiums, originate? Unlike buffalo wings or tortilla chips, snack stadiums have no geographical marker. Bon Appétit guessed the first stadium of snacks was probably built by some “anonymous, brave young American” sometime in late 2008. But the truth is, this culinary Frankenstein actually originated in the murky, dark corners of the Old Internet.

A variety of food bloggers, snackadium enthusiasts, and the long defunct Snackadium.com all trace the snackadium to a now-shuttered website called This Is Why You’re Fat. For over six years, the hugely popular Gawker Media food blog featured user-submitted caloric disasters such as the Nutellasagna, the Moreo, and the KFC Double Down.

Then one fateful day in the summer of 2010, This Is Why You’re Fat featured “The Snackadium,” submitted from a person named Scott Pham. 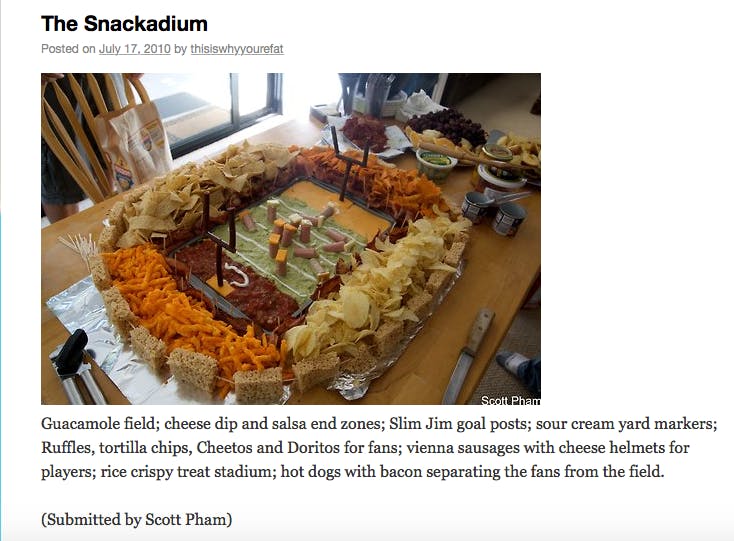 Pham’s snackadium went the 2010 equivalent of viral. “Scott Pham scores a touch-down with snackadium!” proclaimed one Portland-based blog. “Bow in the Presence of Greatness – The Snackadium!”, said another based in Philly, reminding imitators to pay homage to Pham, the template’s creator.

It’s true that snack stadiums were present in pop culture before Scott Pham. In fact, Break.com built a three-story snack stadium for Super Bowl 2010, four whole months before Pham’s submission. But due maybe to the popularity of This Is Why You’re Fat and its homemade, Pinterest-y feel, Pham’s Internet snackadium is what everyone remembers.

Whatever became of Scott Pham? While his name’s watermark is on his submission, Pham made no further mark on the snackadium’s emergence into popular culture. An entirely different Scott Pham, a journalist at The Center for Investigative Reporting, told the Daily Dot that he is often mistaken for the snackadium creator. A textbook company once contacted him for permission to use the snackadium’s photo. Pham said he suspects the snackadium comes up when employers screen him for job searches; his current boss even mentioned it to him. The journalist said that throughout the years people have emailed or texted him a picture of the snackadium along with the question, “Did you do this?”

Wrote CIR’s Pham in an email to the Daily Dot:

“What’s funny is that after friends send me (…the photo of a snackadium) and I tell them it’s not me, they still associate me with the photo. They mention it later and laugh as if it was a funny thing I did once. Once a friend actually made a snackadium and send me a photo of it because…why? I guess because the snackadium has something to do with me, even though I have nothing to do with it. I should feel alienated by this but I don’t. I admit that I kind of enjoy it.”

The Daily Dot was able to locate the actual Scott Pham of snackadium yore, a software engineer based in San Diego, California. Ironically enough, this Pham is shielded from the viral impacts of his culinary master work. Pham told the Daily Dot that he hasn’t been approached about the snackadium since he submitted his photo to This Is Why You’re Fat almost six years ago. Pham hasn’t seen the numerous food blog mentions and wasn’t aware of Snackdium.com.

“I find it interesting it’s become so prolific from my picture,” said Pham. The 28-year old said he was a student at UC-San Diego when he and his college roommate decided to construct their famous snackadium with its signature Rice Krispie treat walls for Superbowl 2009.

“My roommate and I loved snacks, so we had the idea to build a snack stadium and set it up for Super Bowl that year,” said Pham. 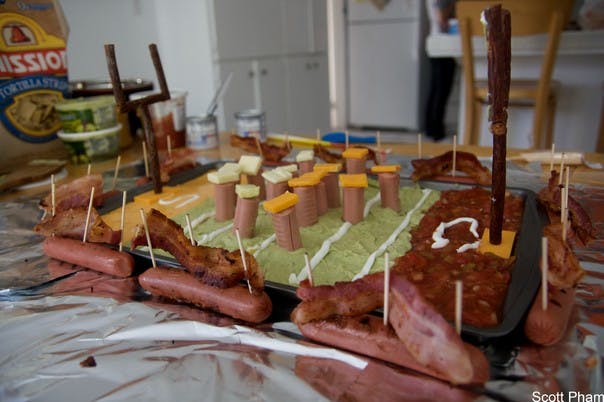 Pham adds the snackadium was by no means his original invention. “I think I saw it on Digg or something like that,” he said. Pham hasn’t attempted another snackadium since his 2009 creation, which he estimated cost between $50-100 to build. Friends ended up ignoring the snackadium during the Super Bowl and going for the standalone snacks.

“We ended up with a lot of stuff left over. We had to demolish most of it,” Pham said. 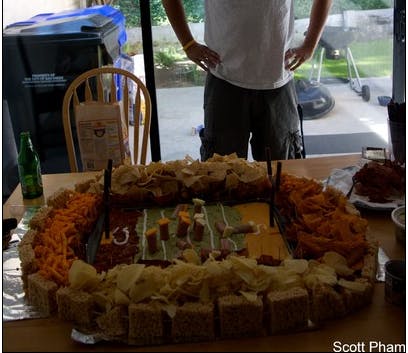 But architect Rich Wrightson credits Pham’s This Is Why You’re Fat submission as what inspired him and business partner Dallas Amsden to bring snackadium-making to the masses. Their Snackadium Facebook page features frequent user submissions and news.

“The snackadium exploded from that one article on the Internet,” said Wrightson.

After a snack stadium they built was a huge hit at a Super Bowl Party, Wrightson said they decided to come up with their own product and launch a Kickstarter campaign. The pair decided to trademark the name “Snackadium” and patented the snackadium-shaped pans. They are currently in talks with a big box retailer to sell their invention in stores.

What amazes Wrightson about the snackadium’s surge in popularity is how advanced the homegrown attempts have become.

“People are making snack stadiums in the shape and style of the stadiums the games are actually held,” said Wrightson. Fan-based creations honoring teams such as the Seattle Seahawks or the Baltimore Ravens are now more common.

A store-bought snackadium kit won’t be necessary for Pinterest’s scores of DIY masterminds. Andrea Tabler of food blog Tabler Party of Two told the Daily Dot that when she first decided to build her snack stadium, there weren’t that many examples available on the Internet. She said her stadium took the better part of a day to plan, design, contract, and fill. 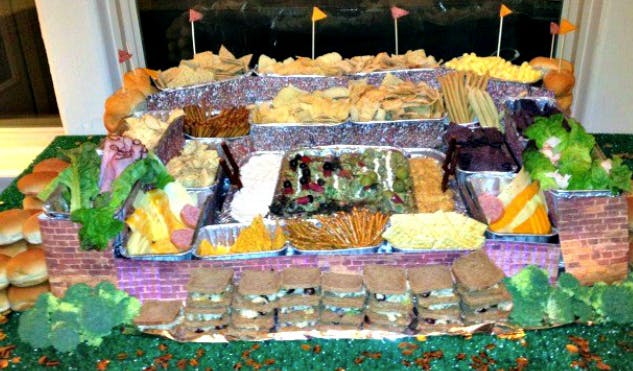 Tabler says there are three reasons the snack stadiums have become so popular on the Internet; entertainers are always looking for a way to impress their guests, an influx of food bloggers are looking to display their skills, and corporations are looking to cash in on branding opportunities.

One person who hasn’t caught the snack stadium fever is Joe Cahn, a chef turned “professional tailgater” and founder of Tailgater.com. Cahn says the advent of recipes available on the Internet, along with cooking shows on Food Network, has made people more prone to show off and get competitive about the simple act of cooking.

Cahn had never heard of snack stadiums until informed by the Daily Dot. While he said the idea of an edible football stadium seemed “clever,” he thought it would be a waste of five hours to build a piece of food architecture that would be demolished in roughly an hour. Nor did Cahn care for the obsessive attention to detail and appearance an edible football stadium would involve.

“Give me food a blind man can love,” said Cahn.