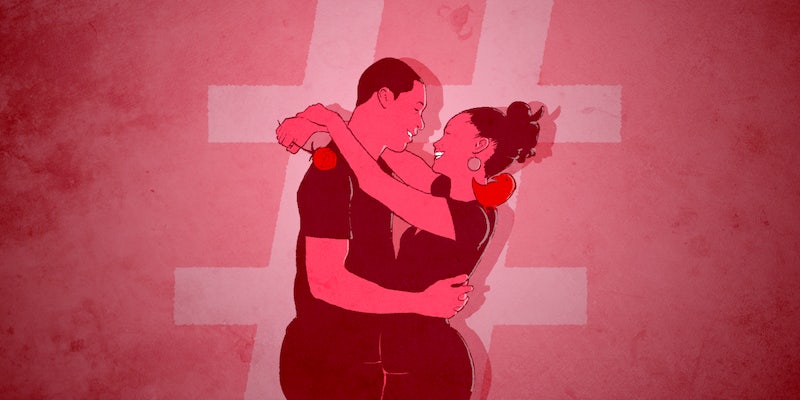 The celebration that's affirmed black lives for over two decades is now online.

Valentine’s Day—an European-centric holiday, which packages romance and “I love yous” around Hallmark cards and boxes of Godiva—is not the only celebration black people are participating in this weekend. Every year on Feb. 13 is a holiday called Black Love Day.

Ayo Handy-Kendi, 64, is the founder of the African American Holiday Association, a non-profit that seeks to preserve black culture through tradition and ritual. Handy-Kendi, who also goes by Mama Ayo, created Black Love Day in 1993 as an alternative holiday for black people to celebrate and love one another at a time of year when love is already in the air.

Black Love Day has risen to prominence over the course of its 23-year history and in recent years, the holiday has become a popular hashtag affirming many forms of black love on Twitter and Instagram.

Black Love Day, Feb 13 is The alternative to Valentine's Day. The Akoma is the original African symbol now called a Valentine.

#BlackLoveDay, Return to love this Black Love Day, Feb. 13 to increase the peace to heal our relationships, pic.twitter.com/ChdL9A7vqS

Handy-Kendi founded the African American Holiday Association in 1989 following years of community organizing and outreach around African-centered culture and holidays. In January 1993, she saw Spike Lee’s acclaimed biographical drama, Malcolm X, and during the bus ride back home her creator spoke to her and inspired her to create Black Love Day.

“The scene in which Spike Lee shows black people shooting down my black brother Malcolm—who is really my hero—it was so graphic,” she said, reminiscing about sitting in the back of a Washington D.C. bus alone following the screening.

“It touched my soul so deeply,” she continued. “As I thought of this scene and I could see the pain of Sister Betty [Shabazz], and I said it out loud to the creator, ‘What can I do to stop the violence and increase the peace? What can I do?’ I heard the creator say to me that we need more black love.”

In February 1993, she decided to have a gathering “in the name of black love”; she celebrated the following year as well, after the death of a son from violence. In the two decades since, Black Love Day has expanded to include events and workshops. Its focus has expanded as well—at one point, Handy-Kendi’s significant other encouraged the her to include white people, “to show love in action on Black Love Day,” she said. The inclusivity, she explained, would be “so that we can all heal our relationships; we can all return to love.” This would include, she continued, “white people looking at their white privilege and their attitudes about race.”

Black Love Day has also inspired other festivities around black love since its creation. For example, artist and We Act Radio host Kymone Freeman, 45, established the Black L.U.V. (love, unity,vision) Festival with other artists in 1997. “I met Mama Ayo once I decided the event should be called Black L.U.V. Festival and that I needed the blessing of the founder of Black Love Day,” Freeman told the Daily Dot.

Freeman uses another black love hashtag, #BlackLuvMatters, for the festival, but #BlackLoveMatters is also commonly used. An event celebrating black artists known as the Black Love Experience on Feb. 20 will use the hashtag #BlackLoveDC.

Freeman believes Black Lives Matter’s growth and popularity made black love easier for people to digest, which might have sparked #BlackLoveDay’s popularity in 2015. “We’re just embracing ourselves,” he said.

“The Black Lives Matter movement has really promoted the concept of black love,” he continued. “We truly benefited from the activist work that these people have been doing, and you have white people saying ‘Black Lives Matter’ fluently. When we started black people were uncomfortable saying black love in front of white people. So that’s how far we come culturally.”

“To say ‘black love’ in a white supremacist system is revolutionary because to a colonized mind, when they hear ‘black love,’ they translate that to meaning white hate,” Freeman said. “We try to convey that loving ourselves shouldn’t be negated to hating someone else.”

Send us what you believe Black Love is, on #BlackLoveDay ?!

#BlackLoveDay turns into Black Love Night! Spreading love for our people is a daily thing! Lets make it a habit in #BlackFutureMonth &beyond

Handy-Kendi is new to social media and technology, but she was happy to discover that #BlackLoveDay is a popular hashtag during an interview with the Daily Dot. She was excited to learn about hashtags, she said, because “being able to use the technology to expand this holiday will advance it quicker.” Sharing black love using the various hashtags is one way to celebrate Black Love Day, but another one Handy-Kendi suggested is to greet black people with Nya Akoma—meaning “get a heart, take patient,” or have a heart and be patient.

“We need so much black love,” Handy-Kendi continued. “Not only are police killing us, but we get out and we really raise a flag and we holler ‘Black Lives Matter!’ And black lives do matter, they matter greatly, but black lives matter within our own people just as much.” There is too much black-on-black crime, hatred and prejudices amongst black people, she said, which is why Black Love Day focuses on increasing the peace.

However, Handy-Kendi acknowledged that statistics about black-on-black crime can be used to perpetuate stereotypes and stigmas about black people. In fact, white people and other people of color are also more likely to be killed by people within their own race, according to the Department of Justice.

Black people are victims of systemic racism and aren’t to blame for this self-hatred, Handy-Kendi said. “We were taught a lot that has made it difficult to love ourselves,” she explained. “People who are hurting often hurt others. So we have been a hurting people. The fact that we are able to express so much love … is the testament to how loving that we really are on a spiritual level and essential level.”