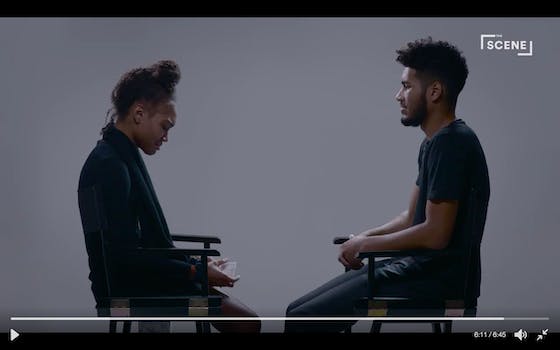 ‘Hurt Bae’ and her cheating ex-boyfriend have Twitter in tears

Confronting a cheater is an agonizing, unbearable pain, but watching someone confront someone else who cheated on them is a different sensation of discomfort and catharsis altogether. That is something Twitter has suddenly learned all too well.

On Thursday night the Twittersphere went in on a video of a woman named Kourtney confronting her ex-boyfriend Leonard about their past as a couple, and, more specifically, why he cheated on her when they were together.

He cheated on her. Now she wants to know why. pic.twitter.com/5hdlpKisjZ

“Broken,” a nearly-seven-minute video produced by Condé Nast Entertainment’s video conglomerate the Scene, opens with Kourtney asking Leonard, “what did you do?”

“I did everything,” he replies.

“I had sex with other girls. I did everything,” Leonard clarifies. And that’s just the beginning.

A day after video went live on Twitter, viewers began tweeting responses with the hashtag #HurtBae, a clear allusion to Kourtney, who teared up throughout the video, and even left once after asking Leonard how many times he cheated. His response? He didn’t know, and he wasn’t keeping count.

“How many times did you cheat on me?”

#hurtbae : "How many girls you cheat on me with"

how she should've came back to that chair #HurtBae pic.twitter.com/FwCHEQCfqo

Some responses were rooted in empathy—Kourtney said she forgave Leonard because he was her best friend, a difficult decision that many people who have been cheated on can understand and have probably warred with themselves.

#hurtbae
"I forgave you because you were my best friend." pic.twitter.com/2Mmoorbsje

The worst thing a/b the #HurtBae vid was homegirl was truly hurt to her core & he looked her dead in her face w/ no remorse.

Others went all in on Leonard, who seemed to show little remorse for his actions despite vocally apologizing. He even asked Kourtney, if she had such little trust in him and wanted to snoop through his things, why didn’t she just leave—like hold it right there, man! IF YOU DIDN’T WANT TO BE IN A COMMITTED RELATIONSHIP, WHY DIDN’T YOU??

An accurate representation of my facial expressions when he said "I didn't count" #hurtbae pic.twitter.com/LugDtCBgOb

"why didn't u leave"
SON WHY DIDN'T YOU LEAVE INSTEAD OF CHEATING, YOU SHOULD'VE LEFT IF U WEREN'T HAPPY INSTEAD OF HURTING HER #hurtbae pic.twitter.com/nKXm9mntI0

"i hope we can stay friends and i can watch the woman you are becoming" #hurtbae pic.twitter.com/PI9IgRWujr

But the gag is…since this went viral he ain't gon have no girl for the rest of his life cuz the whole world kno he cheated. #HurtBae pic.twitter.com/0FbVsJQm7X

And some saw #HurtBae as a cautionary tale of someone who should have learned to let go.

Some of y'all #hurtbae right now but don't kno it yet pic.twitter.com/kjuzkY72gS

I hope y'all girls in those toxic relationships leave today. You are young. You are beautiful. You are worthy❤️.DONT FORGET THAT! #hurtBae

We as women have to grow up. Just cause you love a man, does that mean he deserves you? It must be reciprocated or it means nothing #hurtbae

Nah some of you males are absolute trash. You don't even realise the psychological damage it has on a girl. So useless #hurtbae

The video ended on Kourtney hanging her head while Leonard looked at her, feigning emotion. Supposedly the two live in different states and still talk. However, there’s an amazing silver lining—Kourtney is now with someone else, and someone who, by her word, treats her the way she deserves.

Though she may have accidentally, accidentally tweeted out his Twitter handle. (Sorry to those of you who wanted to attack Leonard—his account is understandably private.)

Kourtney did not immediately respond to an interview inquiry.