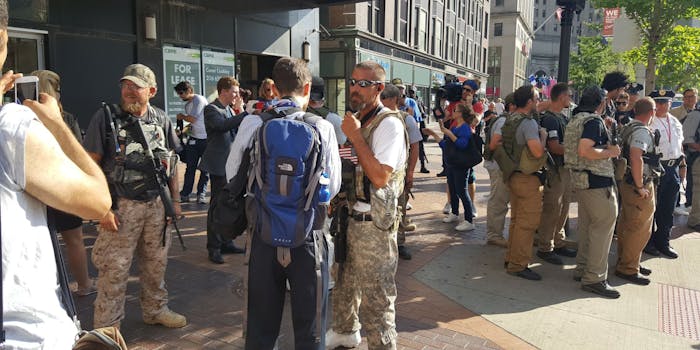 The West Ohio Minutemen were told to leave the downtown Cleveland area.

Late into the first day of the Republican National Convention, 11 men holding AR-15s, AK-47s, and G3s crossed the Detroit-Superior Bridge and marched toward the heart of downtown Cleveland.

Before any of the city’s 5,500 cops themselves laid eyes on the militia group, police radios lit up. But it wasn’t a patrolman or even the helicopters overhead who first spotted the squad of armed men.

It was instead what is maybe the most effective surveillance tool of our time: Social media users who frantically rushed to take smartphone photos for Twitter and Facebook—networks that police are closely monitoring as they keep track of tens of thousands of new faces in their city.

The group in question was the West Ohio Minutemen, who immediately attracted attention as they walked down the street. Open carry is legal in Cleveland, but police, who shadowed the group as they entered downtown, strategized over the radio about how to respond. The Minutemen, who told Vice News that their presence wasn’t about the nominee or the party, attracted a wide range of reactions. Some Republican delegates cheered them. A few Cleveland natives told them that the city didn’t need more guns.

The city’s cops, for their part, soon asked the militia men to leave the crowded downtown area. After a calm exchange, police dispatched an escort to stop traffic, sending the group walking the opposite direction over the Detroit-Superior Bridge.

“They’ll be back tomorrow,” an officer said over the radio.

The police had been present at the convention all day. Huge numbers watched protesters intently, keeping comprehensive track of an amorphous crowd of many thousands.

Anything out of the ordinary immediately invited a swarm of police who communicated quickly with one another either over unsecured radio or, in cases including police leadership and aerial units, encrypted channels.

Groups like PETA, which use props and spectacle to gain attention, were watched. Police-identified “anarchists” in black clothes and masks were followed almost anywhere they went, with cops speaking openly about what to do if they “went operational.”

No such thing happened. The first day of the convention stayed peaceful and calm on the streets, even while the Republicans themselves briefly flirted with Donald Trump-inspired chaos.