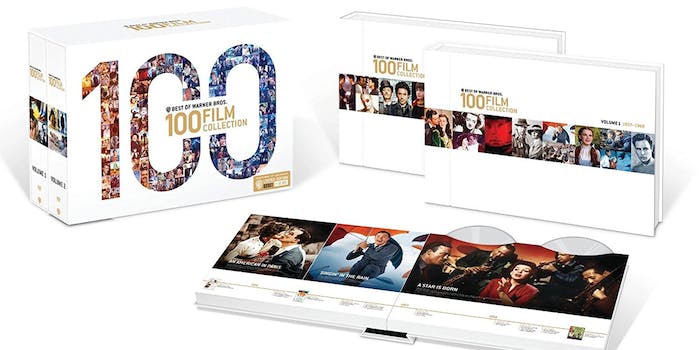 That's less than $1 per movie!

Unsure what to get a film buff for Christmas? How about an extra-large lesson in Hollywood history?

Today only, Warner Bros. is offering a major discount on two movie collection sets on Amazon, saving you over 80 percent on dozens of great movies.

The larger of the two collections is a 55-disc DVD set that features 100 movies, including 22 Best Picture winners. You’ll find classics like Casablanca and Wizard of Oz, as well as more modern masterpieces, like the entire Lord of the Rings trilogy and The Dark Knight.

Don’t worry, Blu-ray fans. The 50-film set is for you, and includes an UltraViolet digital copy of each movie. While the selection is smaller, this set is nothing to sniff at.

Both sets include bonus features, including two documentaries, behind-the-scenes features, cast and crew commentaries, and a limited-edition poster plus a postcard series of movie posters designed by Bill Gold.

The 100-film set is on backorder for Dec. 23, so there’s still a chance to get it in time for Christmas. But any movie lover would be happy to have it, so it’s certainly worth the wait.