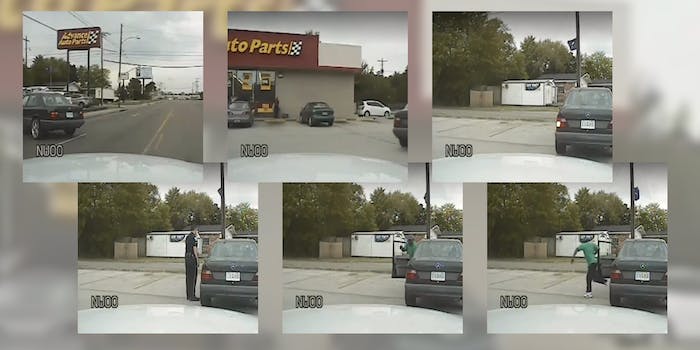 Minutes after this encounter, Scott was dead from multiple gunshot wounds.

Authorities in North Charleston, S.C., have released a dashcam video in connection with the shooting death of Walter Scott that reveals his early interactions with former police officer Michael Slager, who was arrested for Scott’s murder.

The dashcam footage does not show Scott’s death, which was caught on a separate video filmed by a bystander and released by the New York Times on Tuesday. In that video, Slager is seen shooting Scott in the back eight times as Scott attempts to flee.

The dashcam video from Slager’s patrol car shows that the officer pulled Scott over for what appears to be a routine traffic stop.

Slager approaches Scott’s Mercedes-Benz and the two exchange words. Scott tells the officer he doesn’t have insurance and is in the process of purchasing the vehicle—an account inconsistent with that of Scott’s family members, according to the Times.

The bystander video picks up the scene later. Scott and Slager are seen standing only feet apart. Scott flees from the officer, who draws his Glock handgun and shoots eight times at Scott’s back. Scott falls to the ground and the officer walks toward him, gun in hand.

Scott’s initial motivation for fleeing his vehicle is unknown. His family’s attorney, Justin Bamberg, has speculated that Scott might have been concerned about child-support issues. For the past several days, newspapers have reported on a bench warrant—a summons to a person who is considered in contempt of court—against Scott. According to court records cited by the Associated Press, however, no such warrant exists.

The dashcam video also shows a passenger in Scott’s car who was later detained and placed in the back seat of Officer Slager’s vehicle. His name has not been released by the authorities, but a Scott family attorney has identified him as a friend and coworker.

The North Charleston Police Department has declined to provide any additional information, citing the ongoing investigation. Mayor Keith Summey announced on Wednesday that the city is drafting a new policy requiring all officers on the street to wear a body camera.