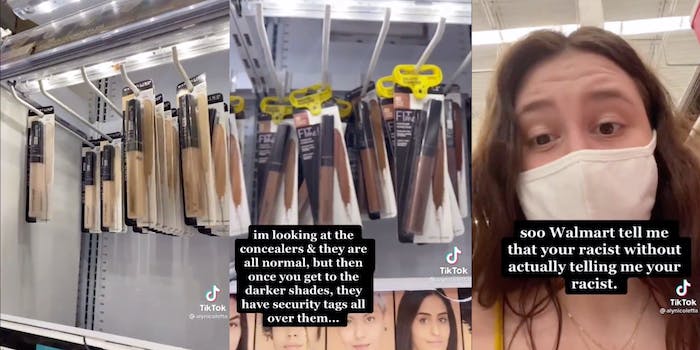 A TikToker has gone viral for accusing her local Walmart of racism after discovering that the store only puts security tags on dark shades of makeup.

TikToker @alynicoletta, who goes by Alyson on the app, uploaded the brief TikTok earlier this week. The video no longer appears on Alyson’s page, but it has since been reposted by several prominent social media accounts, including Twitter user @davenewworld_2. The video spread rapidly online, sparking heated debate and racking up more than 4,500 likes and nearly 2,000 retweets in less than a day on @davenewworld_2’s page alone.

The video shows Alyson shopping at her local Kentucky Walmart. While browsing around the makeup section, Alyson notices an odd trend. All of the lighter-colored concealers are arranged tidily on separate hooks. The darker shades have a noticeable difference: They’re all outfitted with security tabs.

Commenters, unsure of why Alyson’s original TikTok no longer appears on her page, urged her to re-upload it. In the comments of other videos, many thanked her for bringing visibility to the issue and urged her to “expose them.”

Opinions are more divided on @davenewworld_2’s repost. Commenters debated whether the video did, in fact, display evidence of Walmart’s racism. While many users saw blatant bias in Walmart’s anti-theft policy, others defended the retail giant.

“Calling this racism is a BIG over reach,” one user wrote. “If I own a store & notice something consistently going missing, then I have every right to protect my investment & put a security tag on it. The color of a person’s skin responsible for stealing that item is just a byproduct.”

“You do know that it is more likely they lose more of that one product than anything to do with racism,” another person wrote. “If people are stealing product X, you put tags on them to lower the theft. Not cause you want to be racists towards any one group. Theft increases the cost for everything.”

Many people found this argument to be flawed, however, noting that skincare and makeup products are typically far from the most targeted items at retail stores. While Clark.com ranks cosmetics among the top 10 most stolen retail items, they fall below meat, razors, and baby formula.

“I’ll believe this when I see the statistics on stolen cosmetic products from that Walmart, until then I will staunchly believe that there is racism behind this decision,” one user tweeted.

Others drew on their own experiences in retail to challenge the assertion that dark shades of makeup get stolen more frequently than light shades.

“I work in a store in a prominently black community. More is stolen in the (white) section! I RARELY see things stolen from the ethnic products,” one Twitter user wrote. “1 of my depts is hair/skin care. Been workin for the public for 30 yrs. Never had a prob w/poc. Always white people. Do better!”

“We do not tolerate discrimination of any kind at Walmart,” a Walmart spokesperson told Newsweek in a statement. “We serve millions of customers weekly, crossing all demographics, and are focused on meeting their needs while providing the best shopping experience at each store.”

“Like other retailers, we have policies and training in place that allow individual stores to add additional security for items such as electronics, automotive products, cosmetics and other personal care products to ensure they are available for sale to our customers,” the spokesperson continued. “In this case, we are following up with the store to ensure those policies were followed properly.”

The Daily Dot has reached out to Walmart and Alyson.