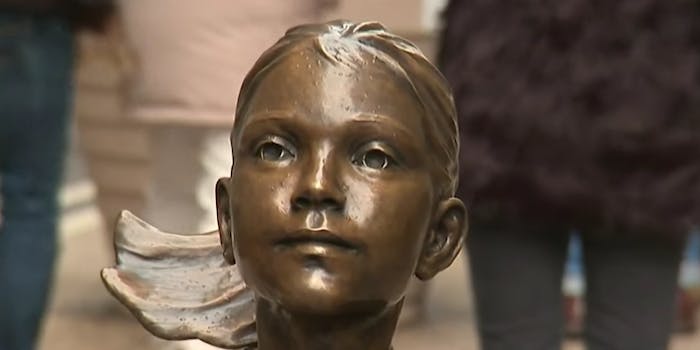 A guy humped the Fearless Girl statue on Wall Street, and now he’s a symbol of rape culture

'This is rape culture.'

Earlier this week, an unexpected, temporary art installation went up in the heart of Wall Street, just opposite the iconic charging bull statue, giving tourists and passersby something new to feast their eyes on. It’s called the Fearless Girl, or SHE, a work created by artist Kristen Visbal and backed by a major asset management company. It stands as both a call for financial firms to welcome more women into the fold and to salute those women who already work on Wall Street, and it immediately generated buzz because of its feminist message and because of its surprise debut for Women’s History Month.

But whenever so many people are simultaneously enjoying something which seems this undeniably progressive, someone is bound to try to ruin the positive vibes. Which is precisely what seems to have happened late last week, producing a deeply gross image that’s gone viral. A man, who’s been widely characterized as a suit-wearing Wall Street bro (although his job and identity are yet unknown) was photographed thrusting into the back of the statue, simulating a sexual assault against an image of a young girl.

The image was captured by Alexis Kaloyanides, a 34-year-old Queens resident, who described the scene to the New York Daily News.

There were people there, a family with a young girl who was posing with the statue, and everyone was talking about empowering children and women and the overall political climate. And then to have this 20-something show up and begin grinding against a state of a 6-year-old girl was revolting.

The act has also been denounced by New York Mayor Bill de Blasio and his wife Chirlane McCray, with the mayor describing the image as a manifestation of rape culture.

Simulating sexual assault — especially on a statue of a very young girl — is not funny. https://t.co/q8Ak3WOuez

This is rape culture. https://t.co/Eswp46lebT

According to Kaloyanides’s account, the statue-humper wasn’t alone—in her Facebook post, she specifically said he had friends nearby who “laughed and cheered him on,” which sounds every bit as upsetting as the act itself. As Kaloyanides told Inside Edition, the whole incident only lasted about 20 seconds, but to say it derailed the experience of the people observing the statue sounds like an understatement.

He was gone within 20 seconds, but it just ruined the mood of the scene. There were people there talking about empowering children and women and for then to have this 20-something showing his entitlement, defiling the statute… it was utterly revolting.

While there’s no telling how much longer the statue will stay on Wall Street, this incident clarifies at least one thing: any boorish bro who still thinks this is funny can now see just how much disgust this story has sparked on the part of so many people. Maybe this viral image will cause someone out there with a bad sense of humor and worse decision-making to think twice about this sort of thing, if only to avoid all the ensuing shame and scrutiny. As for the guy pictured above, he’s already infamous.