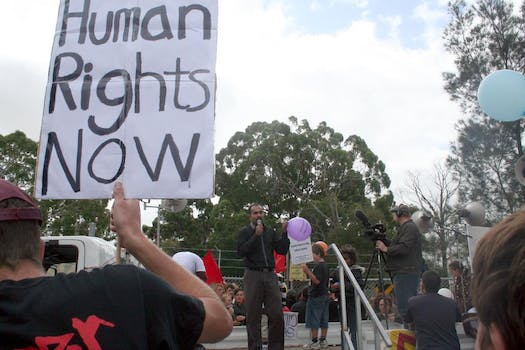 Where to volunteer in honor of Human Rights Day

Human Rights Day is celebrated every year on Dec. 10th, in commemoration of the day in 1948 that the United Nations General Assembly adopted the Universal Declaration of Human Rights. The Preamble of the Declaration reminds us that “recognition of the inherent dignity and of the equal and inalienable rights of all members of the human family is the foundation of freedom, justice, and peace in the world.”

There are many ways to commemorate the day on a local or political level—governments worldwide can strengthen their commitments to human rights or pass budgets for human rights education. Schools and youth organizations can sponsor art or writing competitions using the day as a theme for their work. Community organizations can distribute information or hold informational meetings about the meaning of the day.

On an individual level, people with the time and resources can brainstorm what human rights organization they’d like to make a long- or short-term commitment to—and then make it. But whether you start volunteering on Human Rights Day or make volunteering a New Year’s resolution, here are five examples of the kinds of organizations that need your help making human rights a de facto reality.

Most cities across the United States have food banks and soup kitchens that distribute food to low-income, jobless, and/or homeless individuals. Locally, they often operate out of churches or community centers—and they’re usually in need of volunteers during this time of year. Nationally, organizations like AARP, Meals on Wheels, and Share Our Strength help distribute food to target demographics impacted by food insecurity, all of which have local chapters where people can volunteer.

There are many different homeless shelters across the country that provide care for women, youth, seniors, families, LGBTQ people, and more. The National Coalition for the Homeless links people to local agencies where they can volunteer their time and skills by preparing food, providing pro bono legal services, or helping the organization develop a better web presence to spread the word.

LGBTQ people continue to face roadblocks to their rights all over the world, including here in the United States, where Chelsea Manning was just denied being legally recognized as a woman, a Minnesota law firm is representing a couple who don’t want to treat LGBTQ people equally, and the president-elect has put together a particularly anti-LGBTQ cabinet. National organizations like GLAAD, PFLAG, Lambda Legal, and the Sylvia Rivera Law Project are good places to start, and most of them have local chapters or opportunities. It’s also a good idea to check out what’s in your area, since most cities have LGBTQ centers that provide a variety of services to queer youth, adults, or seniors.

Police brutality and violence disproportionately impact black and Native American people in the United States. Killing or harming an unarmed person, a peaceful protestor, or a person simply for existing is an egregious human rights violation. Organizations like Black Lives Matter and the Black Youth Project have local chapters where you can get involved to combat police brutality and systemic racism, and groups like Campaign Zero outline strategy for policy change, protests, and holding politicians and cops accountable.

Over 700 million people in the world don’t have access to clean water and over 6 million people die annually from water-related diseases and disasters. Nonprofits like Charity: Water, Miya, and Water.org work to bring clean water and water sanitization tools to the developing world—in the United States alone, there are over 2,000 water systems with excessive lead levels. Groups such as Save the Children and Convoy of Hope bring clean water to places with contaminated drinking water, such as Flint, Michigan.