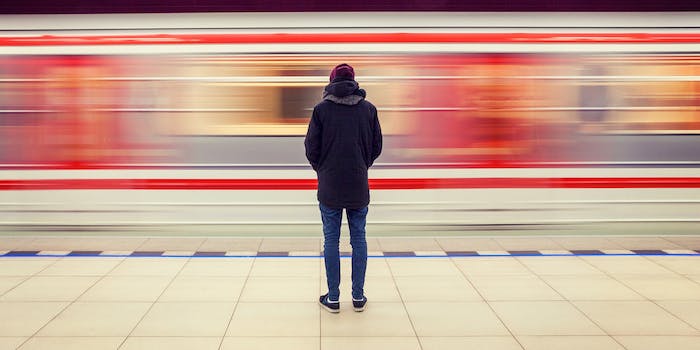 Woman goes off on subway masturbator in one incredible rant

'Do some freaky sh*t again and I'ma get up out this chair and I'ma bust your a**.'

One day several years ago, I was riding the 4 train through Manhattan while reading a book. Though I was engrossed in the novel, I still managed to notice someone suddenly standing very close to my seat. I looked up to see a wrinkly, fleshy, flaccid penis just inches from my face—casually hanging out of a zipper as if that were a totally normal thing.

My story, sadly, is not a rare one. Subway sexual harassment in New York City is a longstanding tradition and a nauseating rite of passage for female commuters. It happens on buses and trains in cities all over the world—but New Yorkers have a particular tendency to ignore weird shit happening right in front of their faces.

But on Monday night, Facebook user Deanna G. Carter was not having any of that. Carter filmed a man sitting across from her that she said was quietly touching himself in full view of all the passengers—and she went off on him so mercilessly that the video was viewed over 700,000 times in under a day.

“Do some freaky shit again and I’ma get up out this chair and I’ma bust your ass,” Carter can be heard yelling at the offender. “You wanna rub your dick, bitch? You rub your dick when you get off the motherf*cking train.”

Carter instructed the man to get off the train at the next stop, as the cries of a small child could be heard in the background. She fiercely demanded that he respond—in a voice so loud that it could surely be heard in the next car.

“I don’t give a fuck if this ain’t your stop,” bellowed Carter. “You get the fuck off this train with that freaky shit.”

The man stood up as instructed and held his hands helplessly in the air, while the other subway passengers stared blankly at the confrontation.

By 2pm Tuesday, the video had been shared on Facebook over 17,000 times. Commenters chimed in, calling Carter a “hero,” with many saying she reminded them of a similarly fearless parent or a relative.