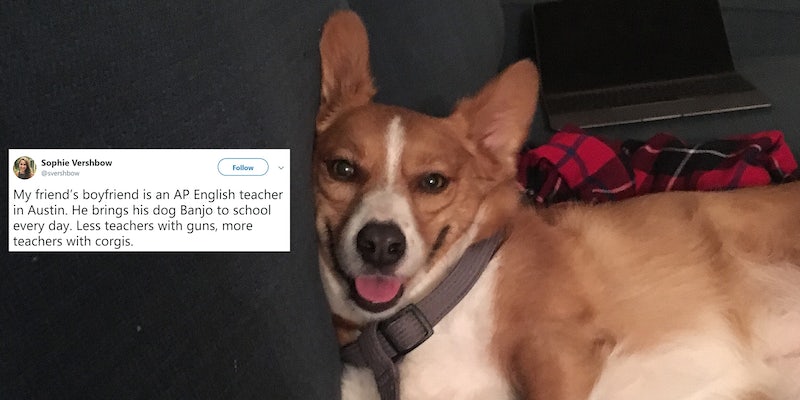 The viral corgi teacher speaks out: ‘Everyone loves having dogs in school’

Haters, you have your answer.

It all started when New Yorker Sophie Vershbow tweeted a photo of her friend’s boyfriend, an English teacher in Texas, who brings his corgi named Banjo to school every day.

My friend’s boyfriend is an AP English teacher in Austin. He brings his dog Banjo to school every day. Less teachers with guns, more teachers with corgis. pic.twitter.com/BZdYUZjK8o

“Less teachers with guns, more teachers with corgis,” said the tweet. While a corgi is not exactly capable of protecting a classroom from gun violence, the photo opened up a discussion on whether a dog could really better a classroom environment.

“I didn’t know she tweeted it at first,” Kenneth Snyder, the now-famous teacher, told the Daily Dot. “I don’t have Twitter or anything. People said I was getting a thousand likes, and then 10,000. Contextually, I wasn’t sure how much that was for a regular person.”

Snyder says he has brought Banjo into his AP English classroom nearly every day for the last four years. He didn’t disclose the name of the school for privacy reasons but said it had a policy allowing dogs on campus even before Snyder began teaching there.

“She sleeps a lot, she hangs out, she knows certain kids that she sits next to who will pet her more than others,” he said of Banjo.

Not to mention his corgi gives him a sense of peacefulness throughout his day.

“As teachers, we work really long hours and it’s a tough job,” Snyder said. “So for me, it’s nice to have a mental break or a mindfulness—to look at something that loves you and looks relatively happy and calm all the time. I’d have to imagine that extends to the kids.”

While the tweet received tens of thousands of replies from those who thought dogs in schools was a brilliant idea, it still had its detractors, of course. Snyder clarified, however, that Banjo isn’t a distraction from kids’ education.

“We set norms around the dogs,” Snyder said. “They’re not supposed to be a distraction. It’s like anything you do—like getting up to go the bathroom or sharpening a pencil. There’s an appropriate time to do it in a way that’s not distracting or rude and [the students] are pretty good about that.”

The tweet also stirred up controversy over classroom cleanliness and student allergies.

Hi, how does this work for kids with allergies? The kids in my family experience breathing problems, stinging eyes, + hives – not conducive to learning or feeling safe + welcomed at school. Dogs are wonderful, amazing creatures – but sadly not for every kid.

Snyder said he currently has no students with severe allergies and those who are allergic in a minor way avoid interacting with Banjo closely. When Snyder’s school intakes a new student, the school receives extensive information on the student’s medical records. There’s in policy in place, he said, to revoke the right of bringing a dog to school for this reason.

“In terms of like, is my classroom a festering pit of dander and hair, the answer is no,” Snyder said, laughing.

“We try to be really mindful of members in our community,” Snyder said. “If a member voiced a real struggle, I’d like to think the school would take that seriously because we prioritize our students.”

While Snyder said he recognizes the dog policy may not work in every learning environment, you can’t deny he offers a workable solution for reducing stress among students and teachers.

@realDonaldTrump Maybe that should be a plan…I want to have a corgi in my school, dammit.

“Everyone loves having dogs at school and it’s definitely a part of the community and the identity as well,” he said. “But I think we are also cognizant of the fact that our main purpose is to educate our kids.”