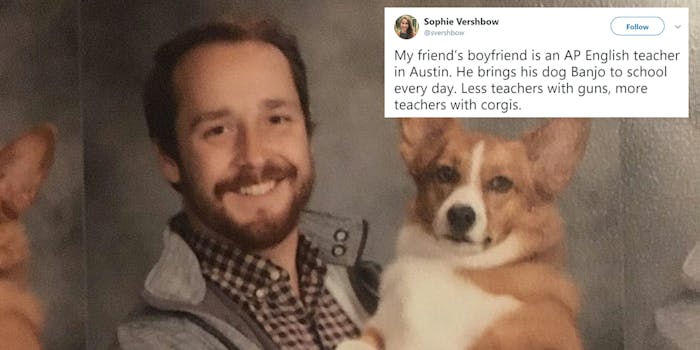 A Twitter user is calling for teachers to arm themselves with corgis—not guns.

New Yorker Sophie Vershbow tweeted a photo of her friend’s boyfriend, an English teacher in Austin, Texas, who she says brings his corgi named Banjo to school every day.

My friend’s boyfriend is an AP English teacher in Austin. He brings his dog Banjo to school every day. Less teachers with guns, more teachers with corgis. pic.twitter.com/BZdYUZjK8o

The tweet resonated with a large audience distraught by gun violence. There have been at least 239 school shootings nationwide since Sandy Hook, according to the New York Times. Since the Valentine’s Day shooting at a high school in Parkland, Florida, that killed 17 people, President Donald Trump has suggested that teachers who do “understand the weaponry” enough to carry should get “a little bit of a bonus” for doing so.

The majority of Americans disagree with this proposal, according to the results from an NBC News poll. Despite this, the Florida Senate passed a school safety bill in early March which allows some teachers to carry guns, according to NPR.

Trump’s suggestions have been met with opposition in the form of political cartoons, statements from student activists, and viral hashtags. Using the hashtag #ArmMeWith, teachers have trended on Twitter for asking to be armed with resources such as funding and school counselors instead of weapons.

But now a not-so-serious suggestion has been thrown into the mix: How about “arming” teachers with corgis? Apparently, cute dogs are just the thing Twitter needed to distract itself from the gun debate.

This is it. The solution to all problems. The dark Knight we need. The key to world peace.

Some took the moment to share their own corgi pictures.

Others considered the tweet to be a serious suggestion for bettering school environments. Dogs really do make people healthier and improve learning environments, according to Business Insider. Studies have found “people with high blood pressure could better control their physiological health during times of stress if they owned a pet.” Petting a dog also reportedly helps reduce cortisol, a stress hormone in the body.

I don’t know why more people aren’t talking about this as a safety precaution. Dogs provide stress relief and protection.

Congress is not moving quickly to address gun access, according to NPR, “despite pressure from the White House and survivors of last month’s deadly shooting.”

The issue of gun violence in the nation requires more than corgis, but Twitter is free to gush over their cuteness anyway and take solace in the fact that Banjo, the beloved companion of the Texas teacher, has her own Instagram.