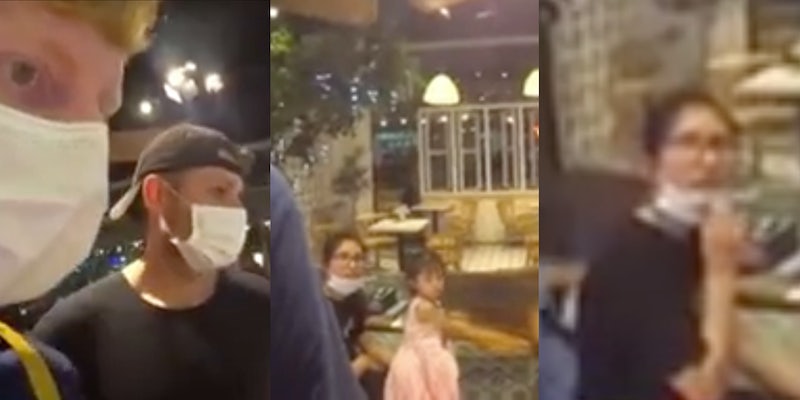 One chuckles uncomfortably for a moment before turning and asking the woman if she wants to 'say that again.'

There’s nothing quite so sweet as clapping back at someone in a language they assumed you didn’t speak. This gratifying experience was captured on camera by two streamers living in Vietnam, who thankfully shared their glorious moment with the rest of the world.

Posted to Reddit’s r/PublicFreakout, the clip—which has earned tens of thousands of upvotes and dozens of comments—is fleeting. It begins with two clearly white men, in masks, standing in front of what appears to be a backlit boba menu.

The men are discussing what to order, in English, when they catch the attention of a woman sitting behind them. In Vietnamese, the woman claims to her young child that “if these two foreign guys have COVID we’ll die.”

Her comment catches the attention of one of the streamers, who simply can’t let the moment pass. He chuckles uncomfortably for a moment before turning and asking the woman if she wants to “say that again” in what I can only assume is flawless Vietnamese. The woman—looking utterly gobsmacked with her face mask nestled under her chin—simply stares.

When the streamer follows up with a note that the duo has “been here a long time,” she finally engages with a simple “really” as she adjusts her mask to cover her mouth—but not her nose.

The streamer informs the woman that they’ve “been here three years” before following the statement up with a question: “You got a problem?”

The woman ignores his query and instead asks one of her own. “You speak Vietnamese?” she asks of the man who has just been speaking Vietnamese. His response is flawless: “Yeah. Are you embarrassed yet?”

The video ends there, as the streamers turn back to the menu to order their drinks. Viewers found themselves obsessed with the man’s straightforward takedown and trolled the woman for everything from her improperly worn mask to her bafflement at the man’s grasp of the language.

Between commenters joking about the woman’s parenting skills and mask-wearing etiquette, the comments section is absolutely overrun with people’s personal stories of similar situations. As it turns out, people often assume that passersby don’t speak their language, and the tales of putting these ignorant people in their place are genuinely cathartic.

One commenter was also kind enough to clarify some of the captions, which were slightly off, according to SalamiScavenger. Not only did the woman use a disrespectful term to refer to the men, but she also used slightly different phrasing when “warning” her daughter about them. According to SalamiScavenger, she actually said “Come here, get any closer to those foreigners, we’ll get COVID and die.”

Another caption was also slightly off, according to SalamiScavenger. Rather than asking the woman if she had a “problem,” the streamer actually said “shame on you”—perhaps an even more fitting response.