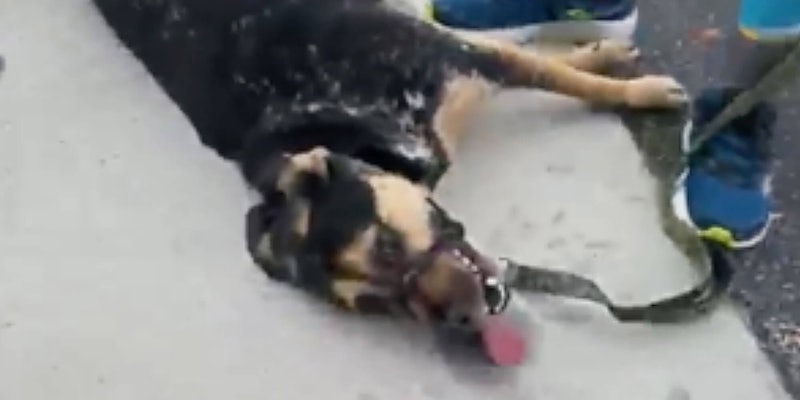 Officers performed a wellness check on the dog.

A video that allegedly shows a man in Florida refusing to give his dog water after it collapsed is stirring outrage online.

The clip, which went viral on Reddit Saturday, shows the canine panting heavily on the ground as onlookers confront the owner.

“What the hell is wrong with people today?” asks the man filming, identified as Craig Clark. “Really, you’re going to run your dog to death?”

Speaking with local news blog Tarmac Talk, Craig’s brother Christopher, who was also on scene, stated that he initially thought the dog had been hit by a car.

Upon closer inspection, the brothers realized that the dog had seemingly collapsed from exhaustion and was unable to get back up.

Christopher said the owner was tugging on the leash in an attempt to make the dog move. After questioning the man, Christopher says the owner downplayed the incident by stating that his dog had collapsed before during their 6-mile runs.

Despite the dog being under visible distress in the 84-degree weather, Christopher says the owner refused to let anyone give the animal water. Even after a car pulled over and offered both water and a ride home for the dog, the owner still refused.

“I’m so pissed off at you, dude!” Craig says. “At least give him water right now!”

The owner eventually picked up the dog, whose tongue could be seen hanging from its mouth, and walked away.

The man, who did not reveal his identity, reportedly spoke with Tarmac Talk to defend his actions.

The owner claimed that the dog was fine and had merely overheated. The sidewalk, he further added, was not the proper place to give his dog water.

The man also claimed that the animal just needed to be doused in water at home and that his vet recommended that the canine not ingest water.

The Broward County Sheriff’s Office was reportedly made aware of the incident and arrived at the owner’s home to perform a wellness check on the dog. The officers, according to Tarmac Talk, “saw no indication of any state statute violation as of now” but will follow up on the matter.

Christopher says he believes the man should not be allowed to own any dogs whatsoever.

“You don’t just run your dog to death until he falls on the ground,” Christopher said. “I have three dogs, and I don’t want people to treat dogs like that.”