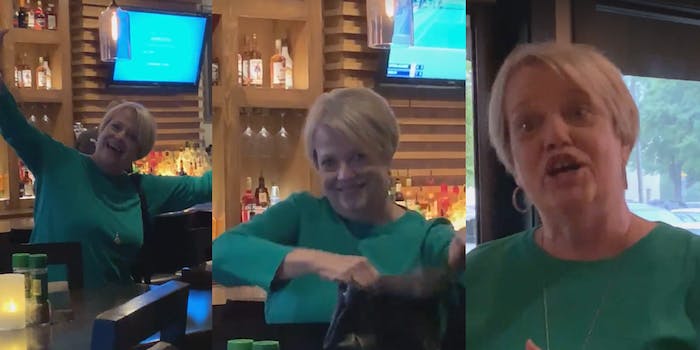 ‘I would say it again’: White woman calls Black woman N-word at restaurant

The woman said she used the racist slur because she has anxiety.

A North Carolina white woman who was caught on video calling two Black women the N-word has come under fire—and reportedly said she would “say it again.”

The woman, since identified as Nancy Goodman by WRAL, is seen in a video captured by Chanda Stewart in the incident that took place on Tuesday at a restaurant and bar in Raleigh, North Carolina.

Stewart and Lakesha Shaw were with another friend at the Bonefish Grill. The video begins with Stewart recording Goodman from a distance, who is seen speaking with a waiter.

“So I am shocked because this person had the audacity right here to come to our table and tell us that we are the rudest people that she has ever met,” Stewart says from behind the camera.

While she zooms in, Goodman turns around, notices her recording, and flashes a smile that can be described at best as creepy. She waves at Stewart and her friends with a seemingly enthusiastic, “Hey girl!”

Goodman then walks over to Stewart and her friend, holds up her phone, and starts recording them, as well.

“I’ve had really good friends that are Black and I love them,” Goodman says.

“We never said anything about color,” says Stewart, while Goodman continues recording the women.

“Let me show you my money, it’s just as green as yours,” the friend says to Goodman.

“Why are you all such stupid [N-word]?” Goodman screams and walks away.

Stewart and her friends respond with a shriek at the use of the slur, before one of them calls after Goodman, “So, you call your Black friends [N-word]?”

Goodman picks up her bag from her table while trying to argue back with the women.

She then comes over to the table and screams in response, “They’re not like you.”

The minute-long interaction has gone viral since it was posted on Tuesday, garnering more than 100,000 views on Facebook.

“What was supposed to be dinner with my girlfriends ended up in us being called stupid [N-word],” wrote Stewart in a comment attached to the video. “The climate of the country today has some people thinking whatever they feel….they can say. The reality is if we were to retaliate with this same kind of hate and ignorance we would be called ‘angry black women.’”

Bonefish Grill has said they’re reviewing the incident, according to WRAL, but Stewart and Shaw have said they don’t plan on returning to the restaurant as the manager did not intervene. Instead, they were reportedly told all parties in the situation could’ve handled it in a different way.

In the video, most other bystanders appear unbothered during the interaction.

Goodman told WRAL that in hindsight, she should’ve just asked a manager to intervene but couldn’t take it any longer because of her anxiety. She said she wouldn’t hesitate to use the N-word again. And she repeated she has many Black friends.

“I wish those women well, and maybe there’s a lesson learned for them, too, that you don’t disrespect an elderly person,” she said.

“The fact that you’re willing to say you will repeat that again shows me the hate that you harbor in your heart for the black African-American race,” Shaw said in response to Goodman’s nonchalance about using the N-word again. “I don’t care what color I am. Give me the respect of being a human being, just like everyone else deserves.”