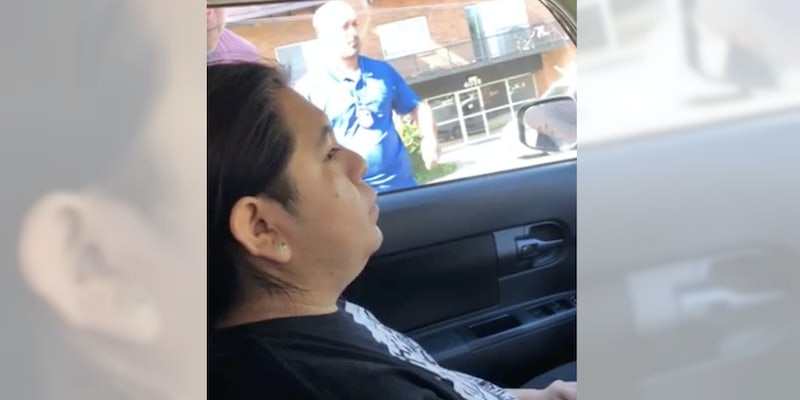 A video of Immigrations and Customs Enforcement (ICE) officials breaking a car window and dragging a man out of his car to detain him in front of his family is causing an uproar, and Kansas City’s mayor is blaming President Donald Trump’s rhetoric for the brutal arrest.

KMBC reports that Florencio Millan-Vazquez was on the way to a doctor appointment for his 7-month-old daughter when a car pulled him over and a man, identifying himself as an ICE officer, claimed to have a warrant for his arrest. In the 32-minute video recorded by Vazquez’s girlfriend Cheyenne Hoyt, the officers tell Vazquez to get out of the car as Hoyt tries to explain that they are on their way to a therapy appointment for their baby.

“We have an appointment, my daughter is sick,” Hoyt said to the officers, “she has to go to the hospital.”

Hoyt repeatedly asked the officers to see the warrant, but her request is ignored.

“Do you have proof that you’re here legally?” an officer responded. “If you have it, we’ll leave.”

After 20 minutes of back-and-forth, one of the officers breaks the family’s car window and drags him out of the vehicle.

According to a statement given to VICE News by ICE spokesperson Shawn Neudauer, Vazquez had already been deported by a judge back in 2011. He returned to the U.S. from Mexico within days of leaving, and immigration officials caught up with him again and issued immediate paperwork to force him to leave the country again. Neudauer stands by the ICE officers’ choice to use force to remove Vazquez from the car.

“During the July 22, 2019, encounter with ICE officers, Millan-Vazquez was uncooperative and refused to exit his vehicle or follow lawfully issued commands issued by ICE and local police,” Neudauer said. “After attempting to negotiate with Millan-Vazquez for about 25 minutes, the ICE officers were left with no other choice than make the arrest by physically removing him from the vehicle.”

Kansas City Mayor Sly James published a post in response to the video on Facebook blaming the Trump Administration for the way it all went down.

“This issue is about politics and the hate-filled ideologies of the current administration in Washington,” Sly wrote. “We must continue to stand together to demand equal justice under the law for all our residents, no matter where we come from or how we got here.”

The family has published a fundraiser to help cover lawyer costs. By press time, the campaign had raised nearly $8,700 of its $20,000 goal.