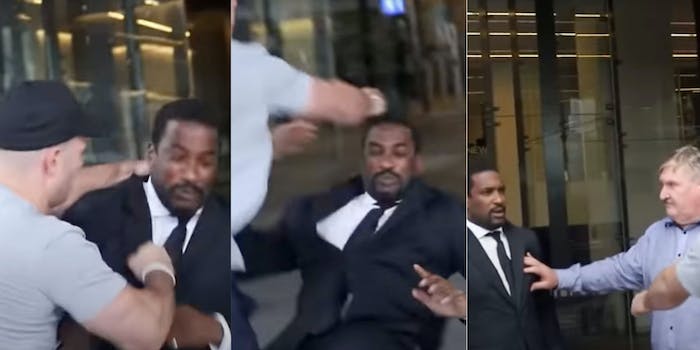 Thomas Sewell is a leader of Australia's National Socialist Network, notorious for racist slogans and actions.

One of the leaders of an Australian white supremacist group attacked a Black security guard at the Channel 9 building in Melbourne on Monday — just hours before that network aired a segment on the group.

Thomas Sewell, a leader of the National Socialist Network, came to the Channel 9 building with a cameraman, seeking to meet with the staff of A Current Affair, which had prepared a report on his group. That report aired Monday about an hour after the attack.

In a 4-1/2 minute video posted to the YouTube channel for The XYZ, Sewell is captured punching the security guard repeatedly after leveling a racial slur at him—and that website is maintaining that Sewell did nothing wrong, whereas Channel 9 sees it much differently.

In the first part of the video, a casually-dressed Sewell is in the Channel 9 lobby with his cameraman recording him speaking, when the security guard informs him that they can’t film in the building.

As the confrontation heated up, it appears that the security guard grabs the camera (but does not take it away) in an effort to get Sewell and his companion to leave. He tells them repeatedly that they can’t film inside the lobby, and must go outside if they want to film.

The conflict escalates, with Sewell repeating “Get your hands off the camera,” and the security guard telling them to go outside and film.

At that point, people appear in front of the lobby, with the security guard rising up after Sewell backs up. The security guard then comes over to Sewell angrily, Sewell tries to throw another punch, and a bystander steps between the two.

The Twitter account for the show characterized the encounter as an attack on the security guard, noting, “Neo-Nazi Thomas Sewell has attacked a Nine security guard just over an hour before our story on his group is set to air,” and adding, “The security guard is currently in hospital.”

But the XYZ, which bills itself as a site that “caters to the needs of the population of Australia which believes in free speech, free markets, and unselfconsciously acknowledges our place in Western civilisation and culture,” ran a lengthy video episode on its site refuting those charges.

Unambiguously titled, “Tom Sewell Did Nothing Wrong,” it included an post-incident video where Sewell said he was assaulted, and the site framed the episode as one in which Sewell “defended a cameraman from an attack by a security guard after they had unsuccessfully sought an interview by A Current Affair.”

“We are deeply saddened and horrified by this cowardly and sickening attack and condemn it in strongest possible terms,” Abramovich said.
“This assault, which has no place in our society, is another reminder of the racist ideology of the neo-Nazi movement and how quickly its agents of hate are willing to engage in violence.”

According to SBS News, the National Socialist Network, which has adopted the motto, “Australia for the white man,” engages in racist behavior that includes Nazi salutes, cross burnings, and characterizing Indigenous Australians as “subhuman.”