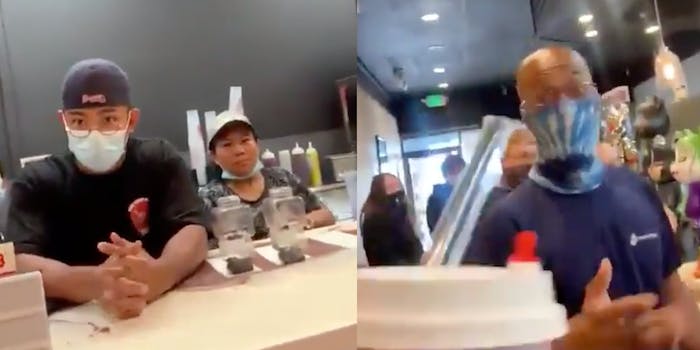 The boba spot is called Trap Tree and calls itself 'the boba plug.'

A Colorado woman is facing backlash online after a video went viral showing her accusing workers at a boba tea cafe of “appropriating Black culture.”

Twitter user @Alewiaaaa, whose account was connected to a makeup brand owned by Alewia Roba, posted a Twitter thread expressing her exhaustion about “Asians stealing Black culture to profit off it.” She was referring to Trap Tea in Aurora, Colorado, which on Facebook describes itself as “the boba plug.”

According to Roba’s Twitter profile, which was set to “private” on Monday when the Daily Dot ran a search, she is Ethiopian.

The thread, which is not publicly available any longer, was shared by World Star Hip Hop, an entertainment news website.

“I don’t know about yall but I am TIRED OF ASIANS STEALING BLACK CULTURE TO PROFIT OFF IT,” reads a part of her thread.

“After I paid is when I started to think like hmm this place has NO black employees so let me just ask before I assume,” she wrote in a follow-up tweet.

The video, which is about two minutes long, starts with her asking at the entrance of the cafe if the place is Black-owned, and someone is heard saying no.

“OK interesting,” she says as she walks in past a line.

After exchanging pleasantries with the server behind the counter who tells her her order will be up soon, she asks if the cafe is Black-owned.

“OK you think using this,” she says pointing to something not visible in the video, “You guys are not using Black culture to get attention… gain customers?”

“Not at all,” the server responds.

“Is this Asian culture?” she asks.

“The [inaudible] is definitely Asian culture,” he responds.

“No but it’s a trap house, though,” she says. “Is that Asian culture?

“It’s not a trap house,” the man responds.

When another server from the back tries to speak to her, Roba announces to other customers: “This establishment is not Black-owned.”

She then turns towards the employees behind the counter and starts yelling, “You’re stealing—you’re using Black culture. Is this not Black culture: Trap Tea, ‘the boba plug’?”

“No ma’am that’s not…” another employee tries to say before Roba cuts in.

“No I came here because I thought it was Black-owned,” Roba continues. “That’s why I came here, told my friends I’m supporting a Black business.

A customer, who appears to be of African-American descent, tries to intervene when Roba says to him, “You’re a coon, don’t talk!”

The video was shared on various social media platforms, including by user @davenewworld_2. The version of the video shared to that account on Saturday has since been viewed more than 127,000 times.

Roba did not immediately respond to the Daily Dot’s request for comment on Monday.

There is a strong link between Black Americans and “trap,” which is a school of Black music.

But the reference to a “trap house” appears to be that of a crack house in a shady neighborhood, according to Urban Dictionary’s definition. There is no indication that it has an explicit link to Black Americans, and many were quick to question why she would fight to have that term associated with her community.

“Imagine gatekeeping the slang word for the location of drugs,” commented one Twitter user.

“A trap house is a house known for drug dealing (usually old and rundown, where drugs are made/sold). I highly doubt ANY race would claim that as their ‘culture,’” wrote a Reddit user.

Many were also shocked that she called the other customer a “coon,” a derogatory term used for a Black person “who is ignorant to white discrimination and unknowingly suffers with self-hatred,” according to one Urban Dictionary definition.

“How is she gonna sit and call them out and then use a slur at another POC?” commented one user. “I could hear in her voice she was serious and hurt but she handled it the wrong wrong way. I don’t think this was the viral she wanted.”

“I think the irony is lost on her if she‘s calling a gentleman a coon in the same breath as accusing an Asian tea shop of racism,” read another comment.

Others were frustrated with the accusation of cultural appropriation.

“Please make her stop. It’s like who cares?” wrote one user on Twitter. “Im black and I plan on selling lasagna in my restaurant when it opens. Does that mean I’m misusing Italian culture? No it doesn’t! People are so creepy nowadays.”

While many said the tea shop’s name was not an example of cultural appropriation, the issue is real and has contributed in the erasure of many Black cultural initiatives, artists, cultural figures who started a trend—only for non-Black people to co-opt it and make a profit.

In an Instagram post on Saturday, Trap Tea made a statement: “Today has been an interesting day and we have received a ton of exposure. Some good and some bad but at the end of the day we want everyone to know that trap tea is about love and bringing everyone together.”

The post was edited on Monday afternoon to remove some information that was provided in the original post.

According to a screenshot of the original message posted by Twitter user @davenewworld_2, the cafe said its name is an “appreciation of black southern culture and the grind , hustle . and drive that we put into the brand.”

As of Monday afternoon, Roba’s Instagram handle and Twitter page for her makeup brand were unavailable online.