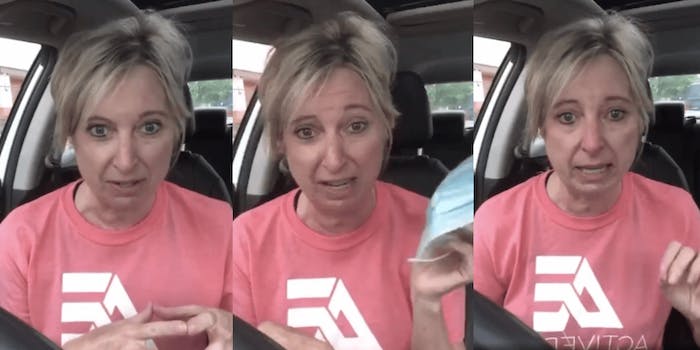 Now, health professionals are mocking her with photos of themselves in PPE.

A video of a woman relaying her “distressing ordeal” of wearing a face mask for just 45 minutes has gone viral.

In the footage, she is heard sharing the physical discomfort and symptoms she experienced, including difficulty breathing, a rapid heartbeat, and “tingling hands.”

Her biggest anguish seems to be the emotional turmoil and not being able to hold people’s babies.

“All I want to do is cry because you can’t see people’s faces, you can’t make human connection, we can’t hug people, we can’t hold their babies,” she states.

The video then takes a dangerous turn as the woman begins questioning the use of mask.

“Friends, look at the numbers and tell me why everybody is living in fear. Tell me why we’re putting these things on and not being able to breathe,” she inquires.

The footage concludes with the woman claiming to know her rights and saying that this is probably the last time she will wear a mask.

The video was first shared by a user on Facebook Live.

On Wednesday, political host Brian Tyler Cohen reposted the video on Twitter, where it went viral. “Karen wore a mask for 45 minutes and now she’s crying because she can’t see strangers’ faces or hold their babies,” Cohen tweeted.

Many online started calling the woman “Karen,” slang for an entitled white woman.

Upon viewing the video, one healthcare professional posted a photo of herself in full personal protective equipment—including a face mask—on the frontlines of the pandemic. “I’m so sorry you didn’t like the mask,” she tweeted.

“Poor Karen. If only she knew what we go through,” another healthcare worker wrote.

The crying Karen joins the ranks of other Karens to emerge during the pandemic. Around Mother’s Day, a video went viral of a woman, now known as “Red Lobster Karen,” fighting with restaurant employees. At the beginning of May, a woman, now known as “Sidewalk Susan,” went viral for spraying down a crying child’s sidewalk art. And most recently a prominent flat-earther threw a tantrum over Gelson’s supermarket’s mask policy.