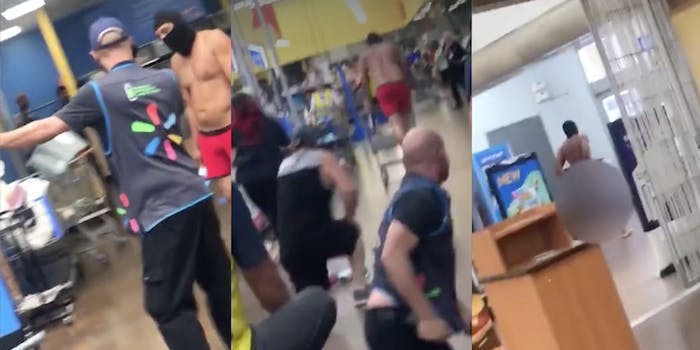 A Louisiana man is facing charges after he punched a 72-year-old Walmart employee on Wednesday.

30-year-old Kendrick Zenon was caught on video, half-clothed in a black ski mask and red boxer shorts. The brief clip, shared by local news station KLFY, begins after Zenon has already become combative. An employee appears to be escorting Zenon out of the store when he passes the 72-year-old man. Out of nowhere, Zenon turns and punches the elderly employee across the face.

Spectators can be heard gasping and screaming as the employee falls to the ground. Several customers and employees begin helping him back to his feet.

The other employee, a younger man who had been guiding Zenon to the door, joins a third Walmart employee as they attempt to wrestle Zenon to the ground. He manages to escape both men, and reaches the door before shedding his boxers and walking into the parking lot completely naked except for his mask. He allegedly assaulted a 68-year-old man on his way out.

Soon after, he was apprehended by police.

Breaux Bridge Police Chief Rollie Cantu told KLFY that the suspect was issued an order of “protective custody” and was evaluated at an area hospital. An arrest warrant is headed his way. Zenon is facing charges including obscenity and “battery of the infirm,” according to KLFY.

Both victims were treated at the scene, according to Cantu. Neither suffered serious injury.

The video was posted to the “public freakout” subreddit and on other social media platforms.